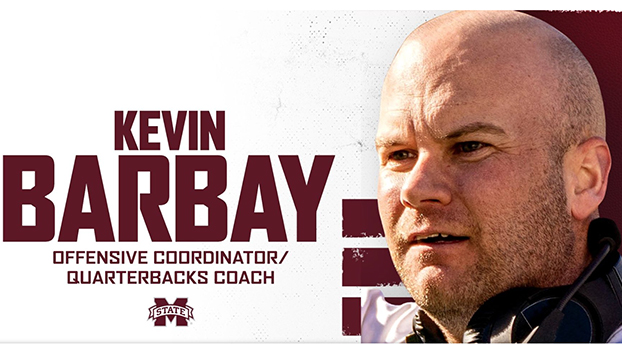 STARKVILLE, Miss, – Kevin Barbay, one of the top innovative young offensive minds in college football who has quickly earned the reputation as a masterful play-caller, has been named Mississippi State’s new offensive coordinator/quarterbacks coach by head coach Zach Arnett.

“Kevin Barbay is an innovative rising star in college football,” Arnett said. “He’s an outside-of-the-box thinker with a brilliant Xs and Os mind. His offenses have proven to be creative, efficient and explosive, and his attacking offensive philosophy will be an excellent fit for our program. We couldn’t be more excited to welcome him and his family to Starkville.”

According to Matrix Analytical, Barbay ranks No. 1 among active FBS offensive coordinators in career average pass game efficiency. He was one of just two Group of Five play callers in 2022 to produce an Explosive Pass Rate Percentage above 19 percent with a top 35 scoring efficiency offense.

Among FBS offensive coordinators since 2009, Barbay ranks per Matrix Analytical:

“I want to thank Coach Arnett for this incredible opportunity to join an amazing staff and a program with a storied tradition,” Barbay said. “Coach Arnett and I share many of the same coaching philosophies, and I’m excited to begin this next chapter of my coaching career in the best conference in the country. My family and I are fired up to get to Starkville and join the Mississippi State family. I can’t wait to build relationships with, teach and develop our players both on and off the field.”

Over the last two seasons, Barbay’s offenses combined to averaged 448.01 yards per game and rank in the top 20 nationally. His offenses have consistently scored over 30 points per game, achieving that feat 56 percent of the time with a 33.61 points per game average.

Barbay’s offense proved to be explosive, racking up 21 plays of 40-plus yards (14 passing, 7 rushing), which was good for No. 8 nationally. The Mountaineers were also highly successful at limiting negative plays, ranking No. 5 nationally in percentage of negative plays allowed (8.28), according to Coaches by the Numbers. Additionally, Barbay’s unit ranked No. 15 nationally in percentage of first downs plus touchdowns that came on first-down plays.

In 2021 at Central Michigan, the Chippewas capped a 9-4 season with a bowl win against Washington State, racked up 30-plus points in eight different games and averaged 440.7 yards of total offense per game. CMU’s Lew Nichols III led the nation with 1,848 rushing yards and scored 16 rushing touchdowns last season as a redshirt freshman. Through the air, the Chippewas averaged 265.4 passing yards a game while totaling 31 touchdown passes and just 10 interceptions in their 13 games.

Hired as a full-time college football assistant at age 25 and Division I football assistant by the age of 28, Barbay also has worked at Stephen F. Austin, Florida, Colorado State and Lamar during the last decade. He was the assistant head coach and wide receivers coach on Central Michigan head coach Jim McElwain’s staff from 2019-20.

Prior to the COVID-abbreviated 2020 season, Barbay helped CMU post an 8-4 regular season in 2019 and reach the MAC Championship Game as the league’s West Division champion. Kalil Pimpleton and JaCorey Sullivan combined to make 139 receptions for 1,702 yards and nine touchdowns that season.

Barbay made his debut as a college offensive coordinator and quarterbacks coach at Stephen F. Austin in 2018, after he and App State assistant Mark DeBastiani worked together at Florida on McElwain’s staff for three seasons from 2015-17.

He was Colorado State’s director of player personnel under McElwain in 2014 following two years as a wide receivers and special teams coach at Lamar from 2012-13.

A native of Nederland, Texas, Barbay played collegiately for MVP-winning Super Bowl quarterback Doug Williams at Grambling State. He earned a bachelor of science degree with a major in exercise science and fitness management from Lamar in 2005 and a master of science in education-sport management from Baylor in 2007.

Barbay and his wife, Kacie, have two daughters (Kynslie, Karoline) and one son (Karson).