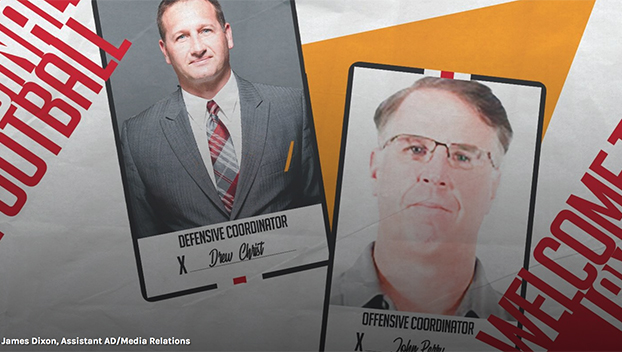 “It’s great to start putting our staff in place,” said Rossomando. “It’s important for our players to get these guys in place as we start to develop our culture as a team. It’s not only important from a recruiting aspect, but it’s important to have them in the building and to have a presence in the office. I have relationships with most of the guys we hired, but most importantly, they’re great coaches, builders of men and guys that can go out and recruit.”

Perry brings 30 years of coaching experience with him to the Golden Triangle, including time as a head coach. Perry comes to LU after one season as the offensive coordinator at Sam Houston.

Perry made the move back to the Lone Star State after one season as an offensive assistant at Rutgers. Prior to that, Perry spent the previous seven seasons as an assistant with the Houston Texans. He began his time with the Texans as the tight ends coach before spending the final four working with receivers.

During the 2019 season, Perry’s group helped the Texans tie a team record for most overall touchdowns scored (46) in a single season and set franchise records for highest redzone touchdown percentage (64.2) and fewest three-and-outs. Houston also tallied 27 receptions of 30-or-more yards that season, which tied for third in the NFL. DeAndre Hopkins was named an Associated Press NFL All-Pro First Team selection for a third-straight year and earned his third-straight Pro Bowl nod after leading the team with 104 receptions for 1,165 yards and seven touchdowns.

In 2018, the Texans captured an AFC South title with an 11-5 record, with rookie Keke Coutee adding to the unit by hauling in 11 passes for 109 yards in his NFL debut, which was the most receptions by a rookie wideout in an NFL debut since the NFL/AFL merger.

Before joining the Texans, Perry was the passing game coordinator and quarterbacks coach at Delaware. Prior to his stint at UD, Perry served as head coach at NCAA Division II Merrimack College (2008-12).

“Perry is a quarterback guru,” said Rossomando. “That is obviously important for me to be able to develop that position. There has to be a connection between quarterback and play caller, and that is one thing that really intrigued me about John. I’ve known him 20 years. I’ve coached against him, played against him and I know his competitive nature.

“I really wanted that for our guys. I also wanted someone who has had experience at a multitude of different levels, and he has coached at the pro level working with guys like (DeAndre) Hopkins and Will Fuller. John brings a different dimension to our football team.”

Christ’s hiring is a reunion of sorts, as Christ and Rossomando worked together at Central Connecticut State helping build the most successful run in school history.

“Drew is a bright defensive mind,” said Rossomando. “Drew gives us a backend guy coordinating the defense, but he understands all three levels. He’s coached at the Power Five level – Ohio State and Boston College – and he’s also been a coordinator at the FCS level for a long time. He is a tireless recruiter and great at relationship building.”

Christ comes the Beaumont after spending the previous two seasons at Boston College where he served as a defensive assistant coach and a special teams analyst. During his time in Chesnut Hill, he helped coach the Eagles to a berth in the 2022 Military Bowl.

Prior to his time with the Eagles, Christ spent time on staff at Ohio State.

Christ joined the Buckeye’s staff after spending five seasons in New Britain, Conn., serving under Rossomando at Central Connecticut State. During that time, Christ served as defensive coordinator working directly with the Blue Devils’ defensive backs. While on staff, CCSU won the Northeast Conference title and advanced to their first NCAA FCS Playoff appearance in program history.
Christ brings more than 20 years of coaching experience with him to the Golden Triangle with coaching stops at Albany, Rochester, Pennsylvania and Swarthmore College. Working primarily with defensive backs and linebackers, Christ has also served as the defensive coordinator at Albany and Rochester.

Cannata comes to the Golden Triangle after successful career that has seen stops at Charlotte, Mary Hardin-Baylor and Texas Lutheran.

Cannata brings nine years of coaching experience with him to the Golden Triangle from the NCAA Division II, FCS and FBS levels.

Cannata has achieved a high-level of success in his young career working on three conference championship teams while helping guide Charlotte to a berth in the 2019 Bahamas Bowl – the first bowl game in program history.

While at Charlotte, Cannata helped orchestrate the 49ers’ first win over a Power Five school when they knocked off Duke (2021).

During his lone season at UMHB, he helped lead The Cru to one of their best seasons in program history posting a 12-2 overall record, a No. 3 national ranking and a spot in the national semifinals.

Cannata’s players have also reaped the benefits of his instruction. He has coached 27 all-conference selections, seven All-Americans (including one FBS All-American) and a former conference offensive lineman of the year. He has also coached five players that have gone on to play professional football (3 – NFL and 2 – USFL), including Cam Clark who was taken in the fourth round of the 2020 NFL draft by the New York Jets.

“Matt is a Houston native,” said Rossomando. “It was important for me to have someone I trusted to coach the offensive line, but also someone I trust to recruit the Houston area. Matt really knows the coaches in that area and understands the ins and outs of recruiting in Houston. Matt has deep ties to the state of Texas after coaching at Texas Lutheran and Mary Hardin-Baylor, and it was just important to me to get him here.”

A graduated of Austin Peay, Walker has built a résumé that spans both FCS and FBS levels and includes time at Power Five schools (Minnesota), where he spent the previous two seasons. During his time in Minneapolis, Walker served as the top strength and conditioning assistant for football.

During that time, Walker designed and implemented weightlifting, speed and agility programs for the Gophers. He was also charged with staying on top of cutting-edge training for the staff.

During the 2020 season, Walker was part of a Minnesota staff that received a berth into the Pinstripe Bowl where they defeated Syracuse. It was the program’s sixth-straight bowl victory.

“Culture begins in the weight room,” said Rossomando. “Pat and I are in lockstep as far as how we want to develop our young mens’ physique as well as their character. We’ve known each other for a while and Pat is extremely knowledgeable and detail oriented. He is going to be with our players a lot, and I trust him. He relates really well with the guys and is going to do a great job. I’m very excited to have him on board.”

Prior to joining the Gophers’ strength and conditioning staff, Walker spent one season at Charlotte serving in a similar capacity. He got his start at his alma mater where he served as a defensive assistant and intern at Austin Peay under the direction of head coach Mark Hudspeth.

He served in that position for six months before joining the 49ers’ program in Charlotte.