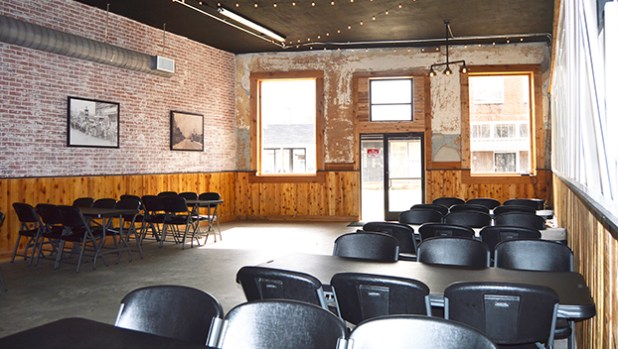 A view of the event room looking out towards Port Neches Avenue. (Mary Meaux/The News) 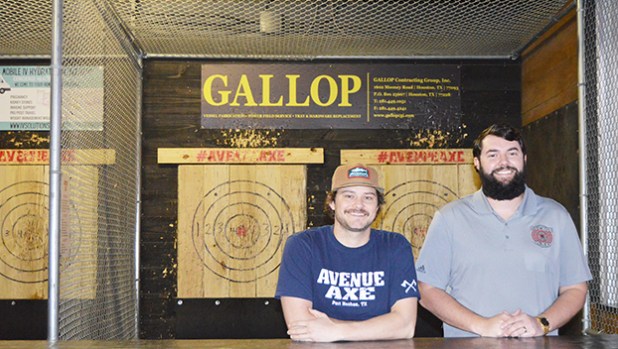 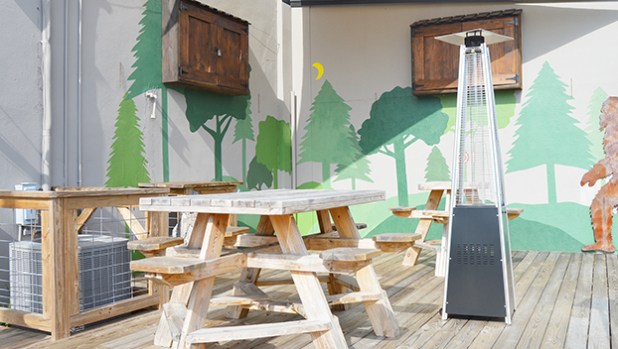 The patio area has tables with seating and TVs. (Mary Meaux/The News) 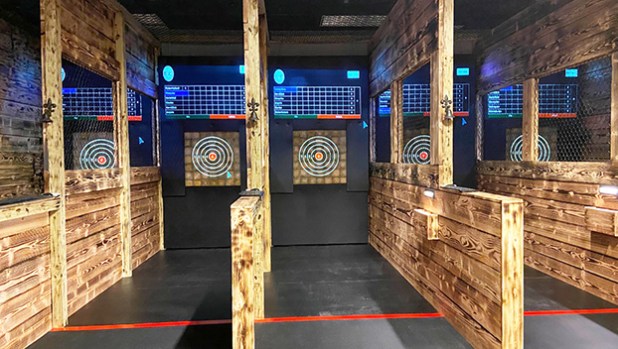 A view of what the new axe throwing ranges will look like. (Courtesy photo) 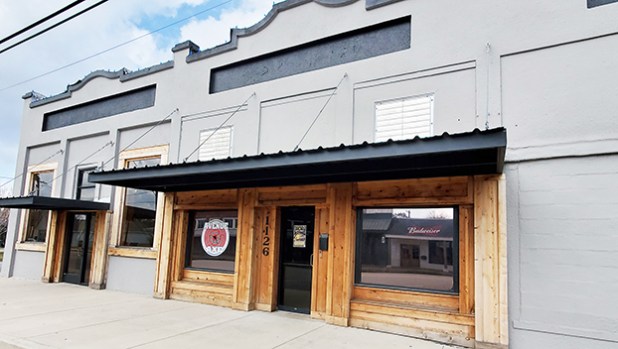 PORT NECHES — Some changes are at hand at Avenue Axe.

With the switch over to new management comes upgrades and renovations to the area’s first place that allows customers to toss an axe at a target for fun.

Owners Garrett Gaspard and Lance LeDoux are going to do away with the large wooden targets with ranges surrounded by wire fence. Instead there will be a projected target that can be changed.

Gaspard said they include a gang of zombies, tic tac toe, blackjac, and a duck game — all of which you can rack up points by tossing the axe.

Currently there are 10 ranges in the large building at 1126 Port Neches Avenue in Port Neches. When the renovations are complete, there will be six to seven ranges.

That’s because the bar, which is in the front left of the main building, will be moved further down.

“And here will be one of those massive TVs, where you can play a bunch of different games on or one big game,” Gaspard said. “We will make it more sports oriented. We’ll have couches, chairs on this side and it’ll be like a lounge on this side.”

LeDoux and Gaspard said they are “decent” at throwing axes but have seen some people who are pretty good.

“We have some people that bring their own axes,” LeDoux said, adding those competitors order their axes online.

Then there’s a 26-year-old guy who they call an “axpert.”

“He’ll do it underhanded, two of them. One overhand and one underhand and he’ll do it between his legs. All sorts of stuff,” Gaspard said.

“Yea, I don’t really do that,” LeDoux said with a laugh.

The business is family friendly and open for children’s birthday parties.

Some youngsters at 5 can toss an axe, while others can’t quite do it, Gaspard said.

Gaspard and LeDoux said they have hosted businesses that come out for team-building exercises. So far they include big industry on down.

Avenue Axe is going to be part of the upcoming BBQ Festival Feb. 11. Tickets for the event are $15 in advance or $25 the day of the event.

When they’re not at Axe, the two men are at their day jobs. Gaspard is owner of G&T Insurance Agency. The independent insurance agent opened his office in August.

LeDoux works at a refinery, he said.

But the one thing the two business owners are also looking to let the public know about is the event room.

The room is separated from the main area by sliding barn doors. Inside are tables and chairs, an area for a bartender, restrooms and a place for a band.

LeDoux said they just booked a rehearsal dinner, while Gaspard said they have reservations for every Saturday for the next two months.

The event room, they said, is a place for baby showers, rehearsal dinners, bridal showers and other such events.

“We are more than Avenue Axe,” Gaspard said. “We need to let people know this is here.”