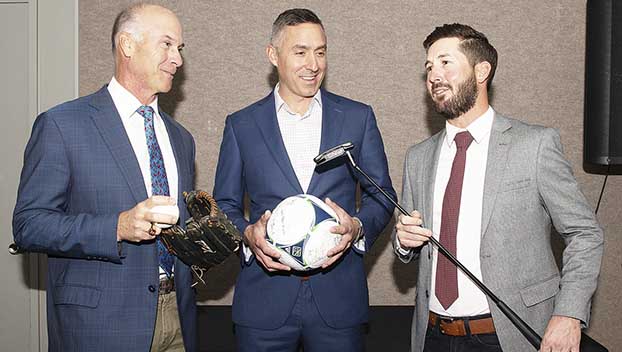 Encouraged by being pain free after months of struggling with his shoulders, enthused by the insights of a new swing coach and elated after recent induction into the Museum of the Gulf Coast, Andrew Landry is eager to embark on what looms as sort of a make-or-break chapter in his PGA Tour career.

“I am so fired up to get going again because physically and mentally I’m in such a better place,” said Landry. “I have been through a very discouraging period because of the shoulder problems and not being able to fight through it because we couldn’t figure out the cause. I developed some really bad habits trying to adjust.”

Landry was already in the final stretch of a two-year tour exemption based on his victory in the 2020 American Express Championship when the goal posts for tour-card retention were moved. Reacting to its LIV threat, the PGA Tour boosted purses and raised requirements for players to keep their card.

Instead of finishing in the top 125 in Fed Ex points to qualify for the playoffs and maintain playing status, a top-70 finish is now required. There are other ways to get a playing card but that’s the best path.

PNG-ex Landry, coming off the fall portion of the 2022-23 schedule, is No. 179 in Fed Ex points. He’ll start trying to improve on that next week in the American Express Championship in Palm Springs. It’s an event he lost in a sudden death playoff to Jon Rahm in 2018 before the 2020 win.

He’s leaving Austin Thursday to spend four days in Palm Springs with new swing coach Scott Hamilton of Cartersville, Georgia. Hamilton, who works with Tom Hoge, Scott Stallings, Chris Kirk and Boo Weekly, among others, is the one Landry credits with helping figure out the cause of his shoulder problems.

It all came to a head in the third round of last July’s John Deere Classic. Hamilton had observed him earlier at the Travelers, told him “something ain’t right with your hips,” and was following him at the Deere.

“I wasn’t playing bad but I was really hurting all week,” Landry said.

On the 17th hole, needing to hit a 3-wood, he told his caddie he couldn’t pull the club back because of how badly his shoulders were hurting.

The caddie said it’s time to withdraw. And that’s what happened.

The next day Landry was at Hamilton’s facility in Georgia. He hit 20 balls for him and said the pain was too intense to continue. Hamilton told Andrew he needed to get one more swing for the CD software he uses to censor a golfer’s entire body motion.

After that swing, he told the former Port Neches-Groves star that his pelvis was not tucked properly, that it was shutting off his turn and that it was likely the cause of the shoulder problems. They made an adjustment and Landry was able to hit dozens more balls without pain.

“I know that sounds crazy,” he said. “It is just so bizarre. Once I started tucking my pelvis properly and getting my upper and lower body to start working correctly, the pain just miraculously went away. I would never have gotten better if it wasn’t for Scott and that software.”

Since the discovery, it’s been an ongoing process to rebuild Landry’s swing and confidence to what it once was. He’s getting closer, and has had some really good days, like when he shot 63 in late November in the RSM Classic.

The main issue has been consistency.

“You don’t know how good it feels for me to make a swing without pain and see the ball go up in the air like it’s supposed to,” he said. “Before I would feel pinching in my shoulders. As I would take it back, I was almost like I was hyperextending the left shoulder.

“It is just totally bizarre that a simple thing like tucking my pelvis properly has made so much difference. It is so nice to imagine a shot, make a swing and see the ball go where it is supposed to go. I couldn’t do that for a year.”

Landry can’t project when things will all come back together on a consistent basis but he’s getting closer and feels that it won’t be long before he is contending again.

“I believe it’s a matter of time,” he said. “It’s not just the actual hitting of shots but my mindset is so much better. I was as down and frustrated as I’ve ever been. My game has never been in a place like that.”

If Landry bounces back to become a PGA Tour factor, he could well have the most famous pelvis since Elvis.