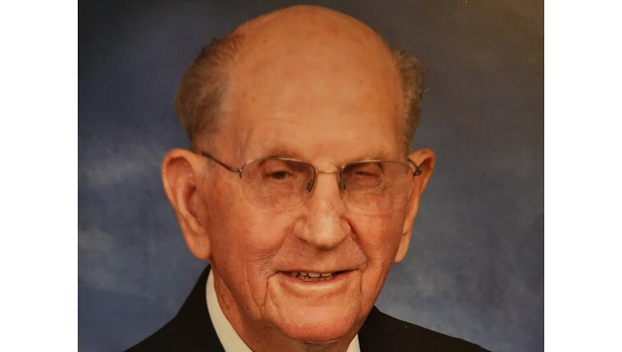 Willis Joseph Doré passed away peacefully with family members at his side on January 7, 2023, one week shy of his 100th birthday.

Willis was the youngest of four children born to Gustave and Anna Doré.

He grew up on their small family farm near Broussard, Louisiana, attending St. Cecilia Catholic School with his brothers and sister.

A natural born mechanic, Willis could fix almost anything.

After over 30 years’ service at Gulf, first as a carpenter, then as supervisor, Willis retired as head of the plant’s carpentry department.

His cabinetmaking skills never left him.

Throughout his life he spent much of his free time building beautiful cabinetry for friends and relatives, and he was always a “first call” for any building or remodeling project.

Willis married Ulana “Lane” Marie Stansbury in February 1947, a marriage would last over 70 years. Willis and Lane raised their four children on Woodrow Drive, a block from St. Catherine’s Church and School where they were active participants.

They then enjoyed over 30 years of retirement on Post Oak Lane in Groves, “visiting” with friends, relatives and neighbors on a daily basis over coffee — strong coffee! — and occasionally traveling to see children and grandchildren.

Those quality times diminished as Lane struggled with dementia for about a dozen years before her death in 2017, just a few days short of her 94th birthday.

Willis was an amazingly devoted and patient caregiver, managing Lane’s many needs as well as their household entirely on his own for much of this time.

Willis’ children and grandchildren, and in recent years, great-grandchildren, continued to enjoy time with him until the end. In November 2022 he attended the wedding of granddaughter, Kathryn Doré, and he spent the most recent Christmas holidays with his daughters and their families.

Willis is survived by children, Nanette (Gary) Babin of Bridge City, Texas, Monica Doré of San Antonio, Texas, Matt (Laurie)  Doré of Des Moines, Iowa, and Marianne (Keith) May of Prosper, Texas.  His grandchildren are Kyle and Jeremy Babin, Sarah May Nguyen, Jonathan and AnnMarie May, Kathryn Doré Sevilla, Emilie Doré Badje, and Anna and Peter Doré.  In addition to grandsons-in-law, granddaughters-in law, and eight great-grandchildren (with another on the way), Willis’s surviving relations include numerous nieces, nephews and their families.

In lieu of flowers, memorial contributions can be made to the charity of your choice.