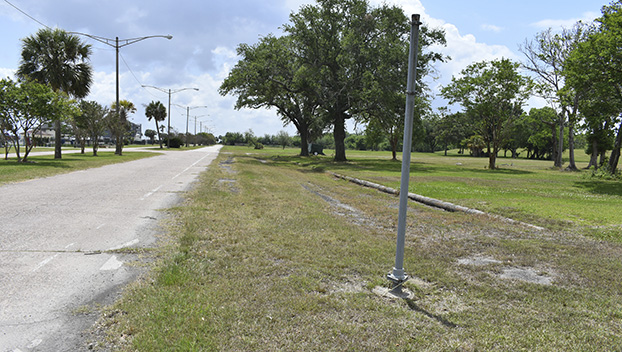 Port Arthur residents voted to allow the city to sell the land at Pleasure Pier Boulevard (on the right) that dead-ends at Sabine Lake then continues to the right. (Mary Meaux/The News)

A Dallas-area developer has been accepted as the sole bidder for 35.24 acres on Pleasure Island, in which he intends to create a water park.

City Council on Monday approved a proposal from Selim Kiralp, owner of Selim Kiralp, LLC., for the purchase and development of 35.24 acres on Pleasure Island. The plot of land between Lakefront Park and Logan Park was approved by voters last year to be sold.

A request for proposals was published Sept. 17 and Sept. 24. In a letter dated Oct. 26, Kiralp called the Port Arthur area ripe for development.

“It is my true intention that Selim Kiralp, LLC, and the City form a partnership that will change the face of the Island and ultimately make it a recreational destination for Texans, Louisianians and hopefully people from all around the country,” he said. “I believe that I am uniquely qualified to bring this vision to the island.”

The developer also submitted a plan for Pleasure Island Waterparks. The plan he detailed is to create a water-themed amusement park.

Kiralp proposed outdoor and indoor attractions covering up to 400,000 square feet that would be open more than 300 days each year, potentially attract up to 600,000 people and employ more than 100 in full- and part-time positions. Renderings included lazy rivers, wave pools, resorts and restaurants.

During Monday’s morning meeting, Councilman Kenneth Marks questioned whether the property had been sufficiently advertised.

“I would like to see, as a representative of the citizens and the City of Port Arthur, that we actually go out and spread this advertising and broaden our scope of advertising so we can attract developers,” he said.

Councilwoman Charlotte Moses said the request for proposals was done according to law.

“We promised the Citizens of Port Arthur,” she said. “It’s taken about a year to get to this point. We have fought our way through to this point. I would hate to see us have to wait.”

A public hearing in April 2022 cleared the way for the city to place the sale of land on the ballot, which was required because the property was deemed a public park. The property was gifted to the city in the 1950s with the stipulation it be used for entertainment purposes if sold.

A proposal was placed on the May General Election ballot.

Pleasure Island Director George Davis said Monday he had sent the request for proposals to commercial developers and real estate teams involved in Downtown revitalization prior to the deadline.

“Everybody was given the fair opportunity to bid,” Moses said.

“Pleasure Island is a diamond in the rough,” he said. “It’s the place to be; the place to invest. It’s my district and I was out there almost every day at one time — day and night.”

Councilman Donald Frank said he has been hoping for Pleasure Island development since joining the council.

“This is a dream come true,” he said. “I believe and I understand what Councilman Marks is saying, but we have been saying for countless number of years that Pleasure Island is a diamond in the rough. But I think by taking this first step and showing developers that Port Arthur is open for development and an individual has come forward to put forth this process. Field of Dreams. If you build it, they’ll come.”

A request for proposal typically initiates the negotiation process and is not the final step for development.