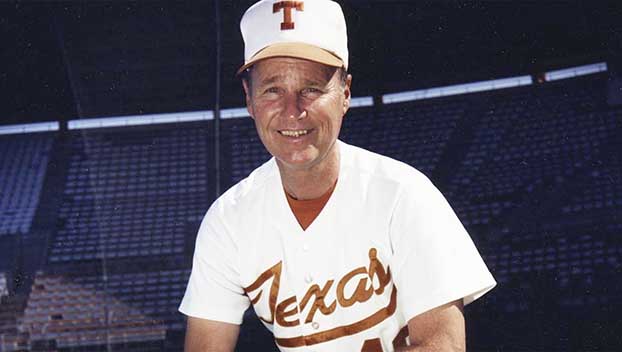 Cliff Gustafson compiled a 1,466-377 mark with a record 17 College World Series appearances and two National Championships (1975 and 1983) while coaching at Texas. (Photo courtesy of Texas Athletics)

Legendary Texas Baseball coach Cliff Gustafson, who won 22 Southwest Conference Championships and two National Championships, passed away on January 2, 2023 at the age of 91.

In 29 seasons as head coach from 1968-96, Gustafson compiled a 1,466-377 mark with a record 17 College World Series appearances, winning National Championships in 1975 and 1983. He was inducted into the Texas Athletics Hall of Honor in 1983 and is a member of the National College Baseball Hall of Fame, the American Baseball Coaches Association Hall of Fame, the Texas Sports Hall of Fame and Southwest Conference Hall of Fame.

“When you talk about all-time coaching greats at The University of Texas — in all sports — Coach Gus is right up there with the best,” said Tommy Harmon, an All-American catcher and longtime assistant coach for Cliff Gustafson. “The historic run he had in building on the great legacy of our baseball program will never be forgotten, and the stature he took it to continues to this day. He was a man who just loved baseball, loved his players, and every year gave his teams everything he had. There was no doubting it, for Coach Gus, it was Family, Faith and Baseball … and I’m not sure in which order.

“He was driven to succeed, and that fueled us as players. Coach Gus was always prepared, and he scripted practice to cover every possible detail in a game. We worked long and hard, but always knew that we’d go into a game ready for any possible scenario. He was going to outwork and out-prepare his opponents and develop his players, and that led to a lot of great years, championships and a hall of fame career.”

Gustafson, who was named the National Coach of the Year in both 1982 and 1983, won 44 College World Series games which ranks second all-time.

“The University of Texas Baseball program is deeply saddened by the passing of Coach Gustafson,” head coach David Pierce said. “He was a remarkable coach and an incredible man that touched so many lives during his illustrious career. Coach Gus truly built The University of Texas Baseball program to the most recognizable brand in all of college baseball. His leadership on and off the field has been an inspiration to so many coaches, players, and staff for many years. Personally I am very grateful to Coach Gustafson and his family for the times that we have spent together since I’ve been in Austin. Texas Baseball will always honor and miss Coach Gus. Our thoughts and prayers are with Coach and his family. Rest In Peace. Hook ‘Em!”

Gustafson started his coaching career at South San Antonio High School in 1953 and led the program to seven Class 3A State Championships in 14 seasons. Before embarking on his historic coaching career, he played on the 1952 SWC championship team which advanced to NCAA College World Series.

“Coach Gus is a true Longhorn Legend in every way, a College Baseball icon, and a University of Texas treasure,” said UT Vice President and Athletics Director Chris Del Conte.

“What an amazing career he had, and his list of accomplishments is lengthy in taking our Baseball program to great heights in his 29 seasons as our head coach. The great players he coached in his long and storied career are many, and their successes are well-documented. The love and admiration shared for him by those legends speak volumes about who he was and his lifelong impact on our program. I’ve been blessed to visit with Coach many times, and he was always such a joy to be around. I’ll cherish those memories and miss him dearly. It’s a sad day with his passing, but his legacy lives on, and he will never be forgotten.”