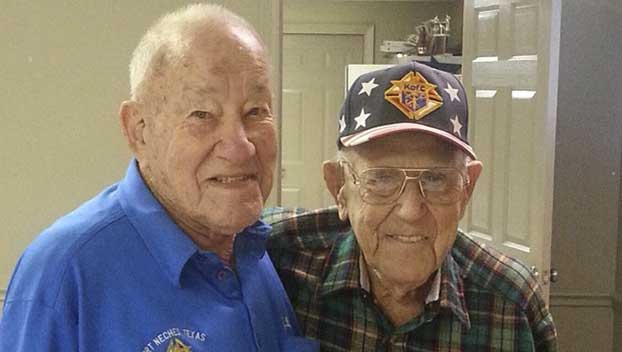 The late J.D. Mire and Alvin Guidry were members of the Port Neches Knights of Columbus. (Courtesy photo)

PORT NECHES — This is a big year for the Port Neches Knights of Columbus as they celebrate their 100th anniversary.

The Catholic organization is currently working on plans for a celebration which will be held after the 11 a.m. Mass Feb. 5.

Chuck Minshew, Grand Knight or leader of the Port Neches KC’s, said the celebration would be held at St. Elizabeth’s Hebert Hall. Events include a meal and dessert, a slideshow, children’s activities, recognition of the oldest Knight and those who have been on the council the longest, he said.

The Rev. Jim McClintock, parish priest at St. Elizabeth Catholic Church on Nall Street, is the KC’s chaplain and will be at the celebration. Minshew said previous parish priests will be invited as well.

The KC’s are a 501c3 organization and they can be seen at festivals selling gumbo, providing scholarships to graduating seniors or college students who need some assistance, or helping people in need. 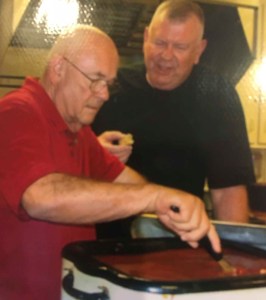 They take part in the Mass as ushers or lectors as well.

“Our big thing is charity,” Minshew said, noting they have provided wheelchairs for people who need the help. “We donate to Garth House and we have several members who volunteer at the Hospitality Center in Port Arthur.

Minshew said education is important to the KC’s and last year they donated $18,000 in scholarships.

“We are totally nonprofit,” he said.

The group also donates to seminarian funds for the Diocese of Beaumont, which covers nine counties in the state.

The local KC group also receives gently used and new items from people they in turn give to those in need. For example, Minshew gave a man a cane last night that was in need of one, he said.

In the upcoming months you’ll likely see the KC’s out and about. They will be selling shrimp gumbo during the Lenten season, they’ll have a booth at the Nederland Heritage Festival and will be at Port Neches RiverFest as well.

Deputy Grand Knight Joe Graffagnino said the upcoming centennial celebration is also a way to possibly recruit new membership. At their high point there were 200 members but due to older members passing away, that number is under 200.

Graffagnino said his father was a KC but he was late to join. He explained why he opted to become a member.

“Because I actually listened to the priest and he was explaining, or interpreting the scripture,” Graffagnino said. “I’d been sitting in the pew being a door stop.”

So he decided to stand up and lead his family in faith.

“That’s why Chuck and I are so passionate,” he said of being part of the organization. “I think, ‘what if I had that information in my 20’s?’”

The Knights of Columbus got its start in Connecticut in 1882 having been formed by a young Catholic priest named Michael McGivney. The purpose was a mission of charity.

Graffagnino explained there are four principles to the Knights of Columbus; charity, unity, fraternity and patriotism.