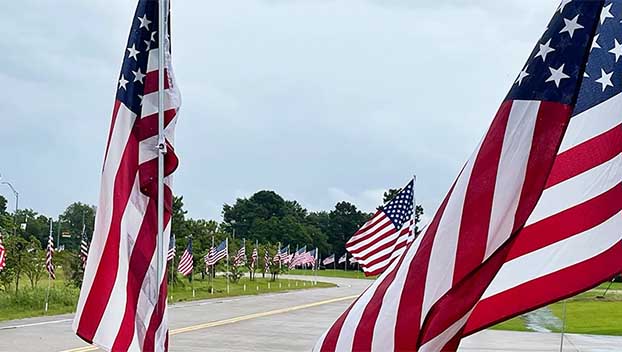 Pack 51 will hold a flag retirement ceremony during their March camping trip.

PORT NECHES — As Robert Montgomery would walk and run around his Mid County neighborhood, he noticed a number of American flags needing replacement.

“I would think, ‘What do people do with those? Let’s honor the price that was paid for that flag,’” he said.

So the long-time Cub Scout leader put a notice on Facebook offering to take worn and battered flags for the troop’s flag retirement ceremony in March. And in less than two days, the offer had spread far past his neighborhood.

“The reception has been good,” he said. “I have several texts and messages. I’ve even had a couple of people who reached out from businesses.”

And some simply showed their support.

“A few Veterans have commented and said, ‘thank you for doing this,’” he said.

Montgomery has been involved in Cub Scouts since his oldest son, now 18, was 5. His youngest son, who is 8 years old, is involved. And his 13-year-old daughter has participated, as well, and also spent time in Girl Scouts.

“Cub Scouts is a blast because you’re getting a chance to teach these kids to camp, and now my youngest loves camping as a result,” he said. “There is a ton of parents involved in it here, which is really encouraging. The parents are big on sharing the same values as Cub Scouts. As Cub Scouts, we promote moral standing with God and also to honor our country. That’s what we teach these kids early on.”

From March 24-26, Pack 51 in Port Neches will camp at Huntsville State Park. And with them will go a great deal of flags from Mid County.

“One of our Cubmasters is a Veteran, and he’s very big on the flag and honoring the flag appropriately,” Montgomery said. “Every year when we do the campout in March, we do a flag ceremony at the same time. We teach the kids how to take the flag apart because we want them to honor America.

“We want them to honor and realize the symbol that is the flag. The flag is a symbol of the price that was paid for the freedom that we have in America. We want to honor that and give it dignity.”

According to information from the U.S. Department of Defense, the Flag Code was created by the National Flag Conference, which was established in 1923. Unserviceable flags are cut in a certain manor and burned in a ceremony that typically involves prayer. Boy Scouts, Girl Scouts, American Legions and Veterans of Foreign Wars posts across the country host retirement ceremonies.

Those interested in joining Boy Scouts can find a nearby pack at Scouting.org.