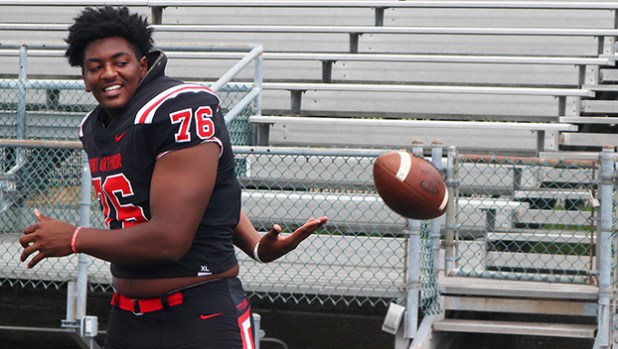 Cayden Bowie was all smiles in the summer of 2022 during a photo shoot for The Port Arthur News’ preseason football guide. (Chris Moore/The News) 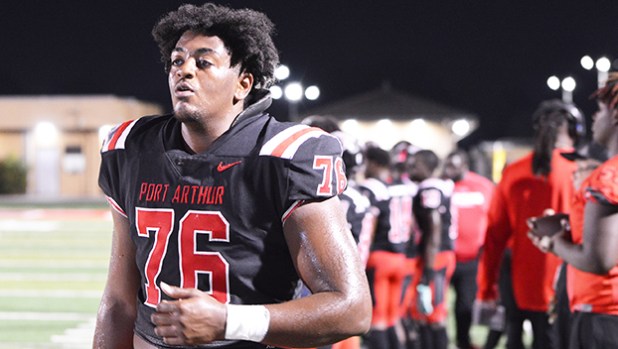 Cayden Bowie is seen on the sidelines during the Titans football season. The senior bounced back from injury in 2021 to perform like a leader his senior season. (Chris Moore/The News) 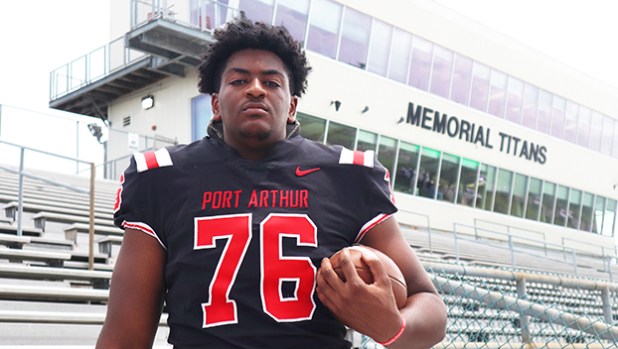 Left tackle Cayden Bowie helped lead a strong Memorial Titans squad in 2022 that advanced to the third round of the state football playoffs. (Chris Moore/The News)

Memorial’s football team had a stellar 2022 season as the Titans went 11-2 on the year and three rounds deep in the playoffs before suffering a tough loss to a very good Longview team.

Longview would go on to lose by just three points in the state championship game.

Even with that heartbreaking loss in this year’s playoffs, Memorial took a big step forward from an 8-3 record in 2021. A large part of this can be attributed to getting back first team all-district left tackle Cayden Bowie.

Bowie went down in a non-district game in 2021 with a torn ACL, which put him out for the rest of the season. With Bowie’s return, the Titans got back an extremely talented player and a true leader in the O-line room.

Bowie understood there were going to be a certain amount of expectations playing left tackle at this level but he wouldn’t let it faze him.

He put his head down and lead by example.

“I didn’t just step up and say, ‘I’m a leader’ and ‘this is my team,’” Bowie said. “It was just my team and coaches saw I was a leader when we were in the weight room or on the field making sure we were pushing each other. It was just something that came natural.”

As far as how the season ended, Bowie said the team had nothing to hang their heads about.

“It’s not so much on how everything ended, but what we accomplished.” Bowie said. “I built a real brotherhood with this team, just grinding everyday with them. At the end of the day, I know every snap we played our heart out. As long as I know that we went out playing hard I’m happy.”

For Bowie, however, the end of his senior season is the beginning of his next football journey. The major college recruit has committed to play football at the University of Houston.

A lot went into this decision, but Bowie said how UH’s staff treated him during his ACL rehab played a big part in his thought process.

“While I was coming back from the ACL injury my junior year, they (UH) just kept checking up on me,” he recalls. “They asked how my rehab was going and how my knee was feeling. That was something that I took into consideration. Not to take anything away from the other schools, but they weren’t doing that. That was just a big thing for me because I knew that Houston’s staff really had my best interest at heart.”

Listed at 6’4,” 300 pounds, Bowie is being projected as more of an interior offensive lineman to start out but possess the length and athleticism to be able to play tackle or guard, which gives him a versatility any coach would love. According to Memorial head coach Brian Morgan, Bowie posses traits that make him a special player.

“Cayden is a very physical football player,” Morgan said. “He’s an aggressive guy on the field and an intelligent one. He shows up every day, handles his business and will be consistent.”

Morgan went on to talk about Bowie’s physical attributes that make him so versatile.

“He is a big, athletic guy, which is obviously hard to find, who plays a very physical brand of football. He’s long and athletic enough to play tackle and has great footwork, but if he has to move inside, he’s going to be big enough to handle himself.”

With the University of Houston moving into the Big 12 next season, Bowie will be tested early and often. However, the young Titans star has stepped up to every bit of adversity he has faced thus far and is ready to face this new challenge head on.

“It’s going to be a big difference playing at that level,” said Bowie, “but if you want to be successful you just have to adjust and adapt to what you are going against.”