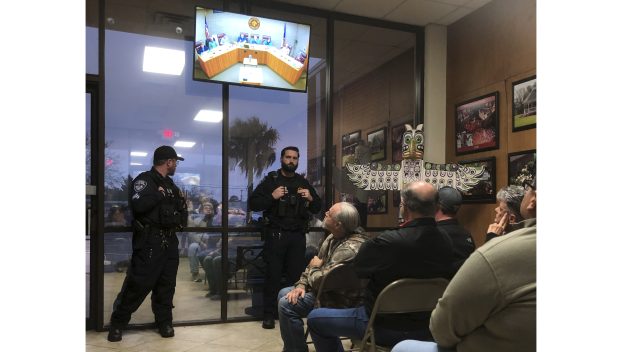 Both council chambers and an overflow room were full Dec. 22 during a special called meeting of the Groves City Council. (Monique Batson/The News)

GROVES — The City of Groves is taking the first step in the process to find a new city manager.

Director of Human Resources Stephanie Gaspard is hoping to identify six executive recruitment companies that will then be used as a pool to identify which will search for applicants.

Gaspard recently called local cities that are either in the process of hiring or have hired personnel through a recruitment company in order to get a cost range. The figures comes in from $17,000 to $30,000.

“I called the City of Beaumont, the City of Port Neches and Nederland and asked if they could give me a cost,” Gaspard said during Tuesday night’s council meeting.

Councilwoman Rhonda Dugas asked if all three cities used the same executive recruitment company. Gaspard said she was hearing some of the same names.

Gaspard is a member of a human resources group and plans to send emails to its members to see who they have used in the past.

Mayor Chris Borne asked if Gaspard has a timeframe for the work.

“I’m hearing it takes about a week to get a proposal in and then once I receive them I will come before council,” Gaspard said.

After that, it could take four to five months to find a city manager.

Gaspard said council would have a chance to meet with the recruiting companies either in person during a presentation or through Zoom.

There are other steps in the process, such as identifying council’s requirements for a city manager.

Councilman Paul Oliver asked if City Attorney Brandon Monk could be part of the search process.

“One thing that would be helpful for me is to be included in the communication as (Gaspard) receives it,” Monk said, adding to get the information in real time would allow him to have the information in advance of a council meeting.

Outgoing City Manager D.E. Sosa, who ended a nearly-20 years with the city that night, sat to the right of Borne for the final time. On Tuesday, a separation agreement between Sosa and the city was finalized.