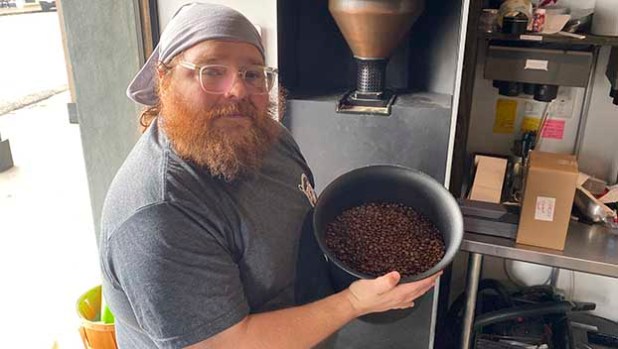 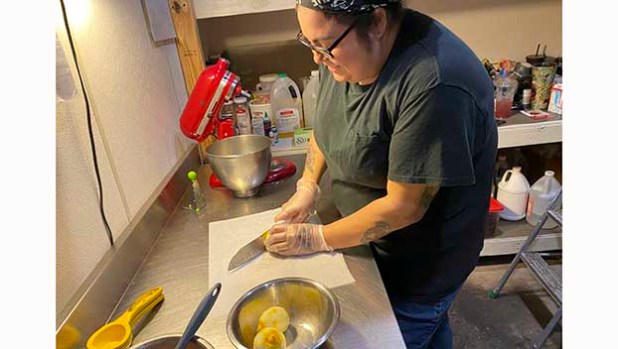 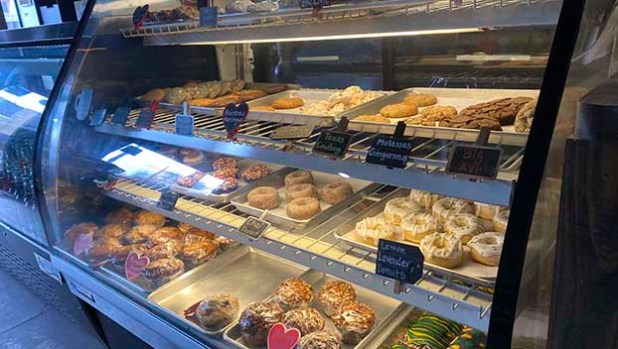 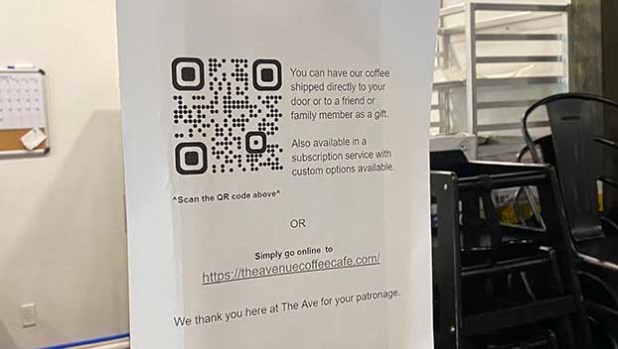 Patrons can find QR codes inside the café that will bring them to the website where they can subscribe to have coffee delivered to their door. (Monique Batson/The News) 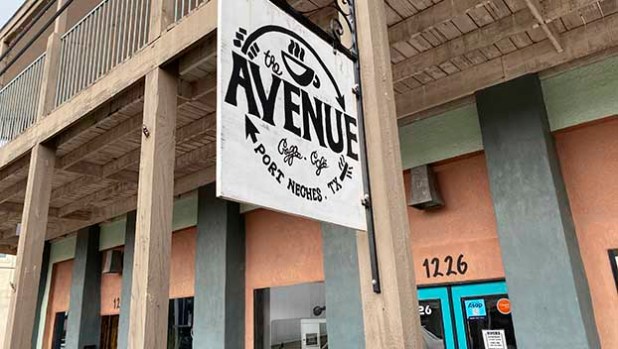 PORT NECHES — Those visiting The Avenue Coffee and Café can find more than unique foods and custom blends within the four walls.

The shop, which is celebrating its fourth anniversary on Port Neches Avenue, holds proof that anyone can do anything.

“Myself and David (Pool) were talking about opening a business together to fill a void in Southeast Texas for high-quality, consistent coffee, and we found ourselves leaning towards the coffee/café aspect,” said co-owner Randy Edwards, who had no background in coffee shops and cafés prior to opening one.

“Having a space where everyone is welcome is the biggest thing. That’s where it all started.”

Their first hire was Meagan Hockett, who Edwards called the leader of innovation when it comes to baking and sandwiches.

But the Port Neches-Groves High School graduate calls herself self-taught when it comes to the kitchen.

“I am the first grandchild on both sides of my family, so as soon as I was old enough to stand, my (grandmother) would have a little step stool because she was always in the kitchen cooking and baking,” she said.

At PNGHS while participating in theater, she would bake items to sell as a fundraiser. And while attending Lamar University, she took as many baking and cooking classes as she could. She would then begin backing at Katherine and Co. in Beaumont.

“I probably learned more there than I did in college,” she said. “It’s more hands-on and figuring things out. That’s where a lot of learning came from, knowing a whole cup of flour — you can’t have any less, any more. It is a science. The littlest stuff changes the whole complete texture and cooking process.”

Now she uses various social media sites as well as some trial-and-error to create the unique items at The Avenue, such as the cold brew brownie and lemon lavender doughnut.

The entire staff also uses cooking shows and competitions for ideas, although the latter became a bit of a problem as they began competing against each other.

“A lot of not-so-good-items were done through that,” she said with a laugh.

But alongside the sandwiches, pastries and other treats comes coffee currently brewed by Chad Perron. And like Hockett, he didn’t start out aiming to make the beverage his career.

“I didn’t used to be a big coffee guy,” he said. “About a year ago, they needed someone to start doing in-house roasting, and so they put me on doing it. I caught on quick and started learning about the different roasts, the different beans and our particular roaster. And now I’m a nerd about it.”

Perron said the shop has a small roaster that they occasionally do tests on, but for the most part it’s a streamlined process.

“Every once in a while we’ll have extra stuff that I’ll mix together and make a roaster’s blend,” he said. “But mostly it’s our normal stuff and we play around sometimes.”

And some of the options, he added, come from making mistakes.

Edwards said this year they are focusing on their in-house brews with a goal to have their product on shelves.

“When I first started they thought about me getting to that point of going to grocery stores and show samples and do sales pitches,” Perron said. “So I’m learning the most I can about the different roasts to be ready for that. We have an online service where people can get it delivered straight to their door. We have a subscription service that does the same thing. So we’re slowly but surely growing and trying to get more and more coffee out the door.”

The subscription service can be done for an individual or as a gift. Flyers inside the café offer a QR code that will take customers directly to the site, where they can purchase deliveries or subscriptions.

And even the ever-changing menu of sandwiches and baked goods has started to expand its thumbprint, as they’ve recently joined the Riverfront Farmers Market. The store has a mobile cart that allows for catering — and also comes handy in the event of an unwelcome surprise.

Not long ago, a vehicle crashed into a nearby telephone pole. The repairs resulted in an unexpected power outage. Hockett said they pulled out the cart and continued serving.

“Within the four years we’ve learned to adjust to anything that’s thrown our way,” she said. “We’ve had COVID. We’ve had the refinery explosion. We’ve had floods; we’ve had freezes. That does not stop us.”

Edwards said “rain or shine,” the shop is open from 7 a.m. to 7 p.m. every day except Easter, Thanksgiving, Christmas Day and New Year’s Day.

“It’s been a wild ride and we’re just happy to be serving the community,” he said. “We’re going into four years and can’t wait to see where the next four go.”