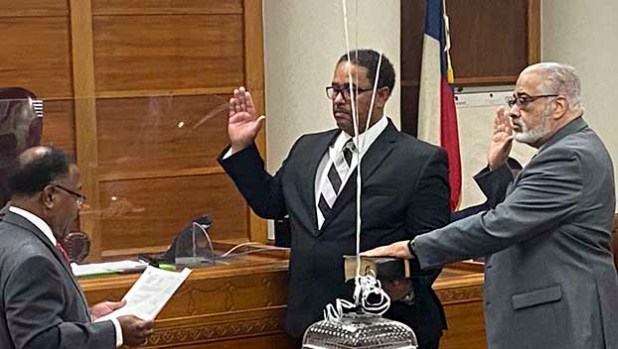 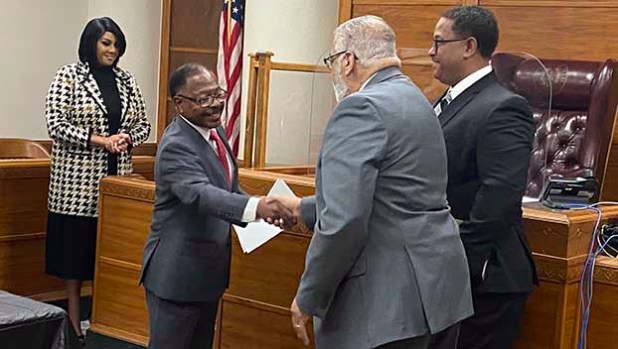 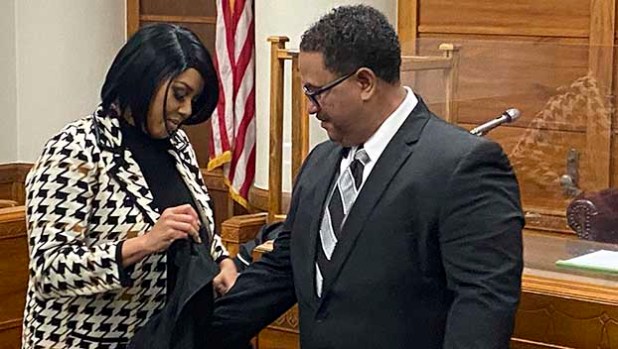 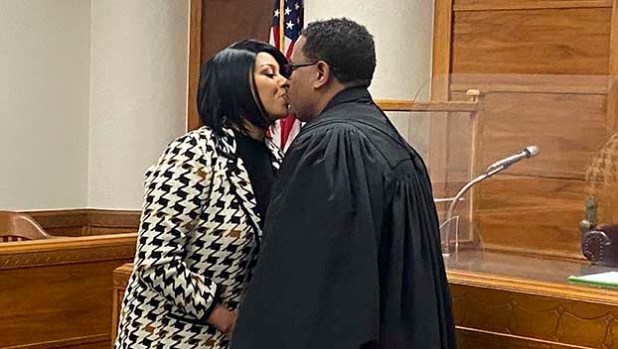 Sueanda and Joseph Guillory share a kiss after the Presentation of the Robe. (Monique Batson/The News) 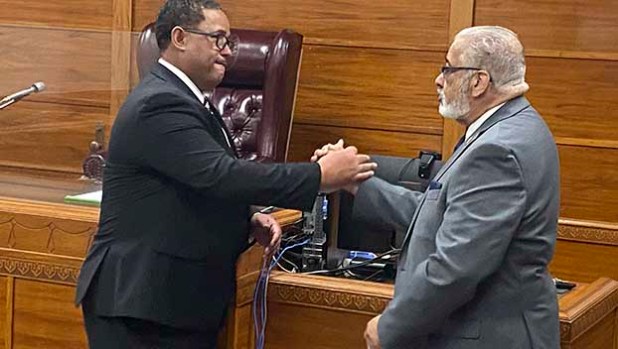 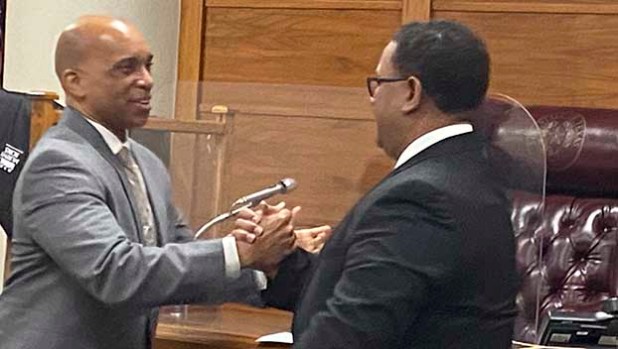 Tears welled in Judge Joseph Guillory’s eyes Tuesday as he thanked a crowd of people who filled his new courtroom, spilling into the hall.

“I’ve had a lot of ups and downs in my life, just like you have, and because of (God’s) grace and mercy I’m here today,” the justice of the peace said after taking the Oath of Office. “Thank you for believing in me and giving me the opportunity to serve you, the people.”

The investiture took place in the Jefferson County Sub-Courthouse, where retired judge Donald Floyd swore-in Guillory and Justice of the Peace Ben Collins.

Collins ran unopposed in 2022’s March Primaries to keep his seat at the Precinct 1 Place 2 bench. Guillory was declared the winner of the Justice of the Peace Precinct 2 race after defeating incumbent Marc DeRouen with no Republican opposition. Within months, an Independent and Write-In candidate joined the race for the November election.

“The citizens of Port Arthur spoke loud. They didn’t have to speak once; they spoke twice,” Guillory said Tuesday. “And I’m grateful, and I’m thankful for this opportunity. I’m going to do a good job. I’m committed to the people, committed to the city and I believe in what we can do collectively.”

“This is a great day for Jefferson County and all of the people of Jefferson County,” he said. “It is exciting for me because this is one of my classmates, so I’m looking forward to seeing him serve on this bench.”

In addition, a multitude of elected officials and community leaders gave remarks.

“It appears that the city, as well as now the law, picks trustees from the Port Arthur Independent School District because they know they’ve been through the fire. They know they can do the job,” said PAISD Superintendent Mark Porterie of Guillory, who was serving on the school board at the time of his election.

He then spoke directly to the new judge.

“The community has decided that you would be the one to sit in this seat and make decisions for this community. You and I have a long history, and we’ve talked very bluntly at times,” Porterie said. “We’ve had some ups and some downs, but it’s always been in the heart of this community and our students. We’ve made decisions, and I think at this point in our life, accountability is so important for this world — especially for our community.”

The superintendent stressed all decisions should be made “first, from God, then from common sense and law.”

“We trust you. We know you. We’re here to support you. You’re in this chair, but you’re still a part of the Port Arthur Independent School District, so don’t ever forget that. We will talk, and if there’s anything you need, you know I’m here for you.”

Prior to administering the oath, Floyd remarked on his time in office.

“I was on the bench for 35 years,” he said. “And my first bench, County Court at Law No. 3, Judge Collins was my bailiff. Now the citizens have promoted him to judge.”

Afterward, Sueanda Guillory oversaw the Presentation of the Robe for her husband.

Also in attendance were their children and Guillory’s parents.

“We can make some changes,” he said. “All we have to do is step up and participate. Something my mother told me, she said, ‘Son, when you go out in this world, whatever you do, you don’t embarrass the name. You carry your father’s name.’ Thank you, Daddy, for making me the man I am. Thank you, Momma, for giving me birth.”