Port Neches athlete is going the distance for local business 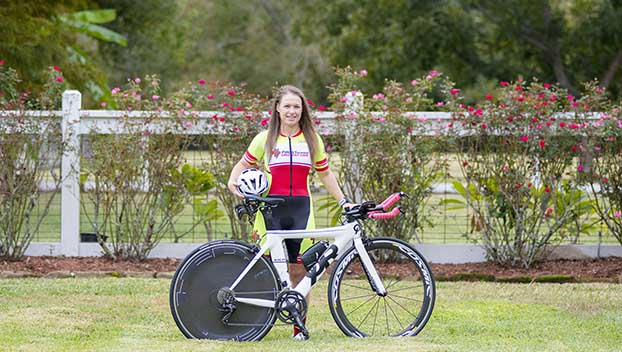 The famed contests comprise a 2.4-mile swim, followed by a 112-mile bike ride and conclude with a 26.2-mile run. Requiring months of training and preparation, few people would take on such a daunting task.

Meet Southeast Texas’ very own Iron-woman, Crystal Moore. The Angleton native, who now resides in Port Neches, is tremendously dedicated to her craft — whether it’s competing in endurance sports or working as one of the Golden Triangle’s few certified triathlon coaches.

Moore comes from an athletic background, playing soccer for 14 years. However, she didn’t try endurance sports until after college. She competed in her first triathlon in 2012, causing her to fall in love with the sport.

“I was always involved in sports growing up,” Moore said. “I did intramural and club sports in college, too. But after college I gained some weight, like most college kids do. I was looking for some way to get healthy again, and I fell into cycling. After that, I met a guy who was hosting a triathlon a couple months down the road, and he invited me to do it. It was just a little sprint triathlon, and that was my introduction.”

Sprint triathlons, like the one Moore first competed in, typically consist of a 750-meter swim (0.5 miles), a 20k bike ride (12.4 miles) and a 5k run (3.1 miles). The training involved is rigorous but necessary to prepare the body for such a task.

“The typical 12-week training block is about as short as you want to have,” Moore said. “Per week, you’ll probably swim twice, bike twice and run twice. Hopefully, you can throw some weights in there occasionally. It just all depends on the daily schedule and if you’re able to squeeze it in, but typically you want to have to have each of every discipline.

“As for the Ironman, I normally only do one a year. That takes a lot out of you, and there’s a lot of recovery time. I also like to mix in running and sometimes some cycling events on the side. You can get up to 15 to 20 hours a week easily in training alone, so it’s almost like a part time job.”

There’s more to triathlon preparation than just the physical training, though. Moore said taking care of her body through a healthy diet and spending time off for rest and recovery is also crucial.

“I think just listening to your body is important,” she said. “You’ve got to take time off, but some people don’t. I think at minimum you need to take maybe four weeks off from structured training. Obviously, treating your body right by eating the right things and using recovery tools like compression boots, and the little massage guns helps, too.”

Yet, the work other people can see is only half the battle. The mental fortitude needed to compete in such strenuous competitions is astounding, so building the toughness to push through is key to keep pushing past the brink of exhaustion.

“I think most of that toughness is built in the training,” Moore said. “You train so much by yourself, that’s the hardest part to me. Once you get out there on the course, a lot of people say, ‘Oh, that’s your victory lap, because you’ve put so many hours into it. You’ve also got so many other people out there, and your family cheering you on. It’s hard to stop. You know you’re gonna be able to make it.

“When I’m competing, my mind never gets bored. On my bike, I have a power meter I’m looking at constantly. You’ve got to time your nutrition throughout the whole thing, too, so I’m looking at my watch to see when the last time I took something was. Numbers, numbers, numbers; that’s all we’re thinking about.”

Moore is certainly familiar with the numbers involved with her passion — particularly when it comes to personal bests.

She set her PR for the full Ironman triathlon in 2018 with an official time of 11:40:08. For reference, the average Ironman time is somewhere between 12 to 13 hours, a mark Moore comfortably surpassed.

“The run’s got to be my favorite,” she added. “The bike is fun, but I feel like I excel in the run. The swimming is probably my least favorite. It’s just so much harder than the other sports, I think.”

Moore said she decided to take her passion more seriously and become a certified triathlon coach in 2017. At a multi-day conference in Arlington, she attended sessions to develop her coaching skills by creating customized training plans, learning new exercise techniques and even becoming CPR certified.

“One of the main reasons I decided to be a triathlon coach was because we don’t have that in this area,” she said. “I don’t know of another triathlon coach in the Golden Triangle. There’s something to be said about having somebody that goes to the track with you to look at your run form, or somebody that can meet you at the pool and see your swim form to say, ‘Hey, we need to tweak a few things here.’ Having that relationship and being able to be local is so much better than having somebody 200 miles away.”

Moore also recently formed a partnership with local business First Response Urgent Care, which will be sponsoring her Ironman Galveston entry in April 2023.

The relationship with FRUC began when Dr. Thi Nguyen reached out to Moore for coaching ahead of a triathlon he was set to compete in.

“I was his swim coach for three months or so until his event,” Moore said. “Our friendship just grew from there. First Response has really tried to promote their brand and promote local businesses, and they want to get everybody active and supporting each other. They’re supporting and sponsoring me for the April event, and we have four teams of three sponsored by First Response for the relay.”

As she ramps up her training ahead of the Ironman in April, Moore lives by one of her favorite quotes by Boston-winning marathoner Des Linden — “Keep showing up.”

“Not everybody has a good workout every time,” Moore said. “But you keep showing up and the next one will be better. It’s like building with bricks. With the more bricks you stack, you’ll eventually have a building.”