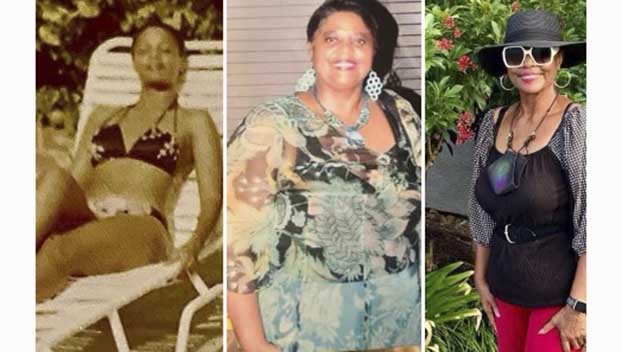 LaWanda Finney is pictured, from left to right, at her starting weight, heaviest weight, and current weight. (Courtesy photo)

On any day, LaWanda Finney can be seen walking quite literally anywhere. Those who aren’t near the Port Arthur woman can find daily videos of her walks and trips to the gym on Facebook.

Her enthusiasm and smile are infectious alone. But when you add in the photographs she shares from her weight loss journey, infectious turns to inspirational.

“It’s so embarrassing because my journey started years and years ago,” she said. My father was a United Methodist minister so we traveled around and I was always slender. When I moved to Southeast Texas, I was introduced to a brand new way of eating. It was unhealthy but I loved it.”

The move to Port Arthur came after marrying her husband in 1981. She gained a large amount of weight with her first of three pregnancies and ultimately joined Weight Watchers in 1985 but quit attending meetings just shy of her goal.

“I got to the point where I knew I couldn’t keep doing this. It’s personal at this point,” she said. “The doctors told me I was pre-diabetic and in five years would be diabetic. I started researching and said, ‘I heard you can turn this around.’ They told me they didn’t think I could at my size. They don’t know me like that.”

After having her youngest child at the age of 40, Finney began the path she currently walks on.

“I was always walking,” she said. People would see me at the mall walking. I would walk from my house on Blackberry Lane to Holiday Inn to Twin City Highway, but it got dangerous.”

Crime rates had begun escalating at an apartment complex she walked near. At one point a police officer turned on lights and sirens to warn her, but the patrol car eventually had to move in front of her because she never heard it.

“My music was so loud,” she said. “I listen to all genres of music. I love the music. The beat keeps me going.”

Earlier this year, Finney was approached by Yolnada Avera, the coach for SETX Trekkers. The local group is an affiliate of GrilTrek, which started in 2010 and now has more than one million members across the U.S., according to the website. 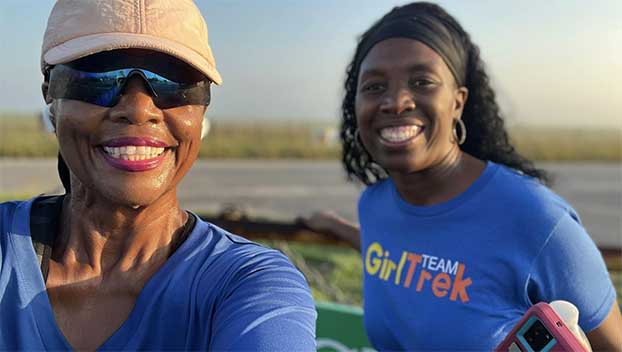 LaWanda Finney, left, and Christine Barnes are pictured during a SETX Trekkers trip to the Gulf Terrace Hike and Bike Trail in Beaumont. (Courtesy photo)

“It’s an organization asking African American women to walk for health,” Avery said. “Just 30 minutes a day, that’s it. And all women can join. That’s the beauty of it.”

Avery, who works at Woodrow Wilson Early College High School, joined six years ago and applied to become a coach this year. Since creating SETX Trekkers in June, more than 120 people have walked with them at weekly walks.

Finney said when she first joined, she told Avery she didn’t want to be a leader.

“She’s convincing,” Finney said. “She is so amazing and so sweet.”

“She didn’t want to do it, but she does a great, great job,” the educator said.

And through social media, Finney has found a way to reach even more people to encourage them.

“We’re heading into a new year,” she said. “People make these commitments at the gym. People will come for maybe a month and then you see it decline. But make a commitment and a why. Why are you doing this? What is the reason? For me it was my health.”

Now down 125 pounds, she can be found walking when not walking with the group she’s walking virtually with family and friends.

And that is also a part of the Port Arthur woman’s journey, as her husband battles cancer. Through walking she has found a way to reduce stress levels and maintain an uplifting spirit.

“I never stop walking because I never stop eating,” she said. “I walk every day, even if my husband is in the hospital or having surgery. I’m outside the oncology center walking. I walk every day no matter what. I love it so much.”

“The cool thing about GirlTrek is there is an honor system,” she said. “They don’t say you have to hit so many steps, just 30 minutes. I’ve literally seen some amazing things happen.”
Several women in the group, through exercise, have been able to reduce or eliminate daily medications.

Finney said she shares her journey as a way to repay all of the stories she once would research for inspiration.

“My message is simply: I don’t know anyone who likes food more than me. If I can do this and come this far, you can too,” she said.