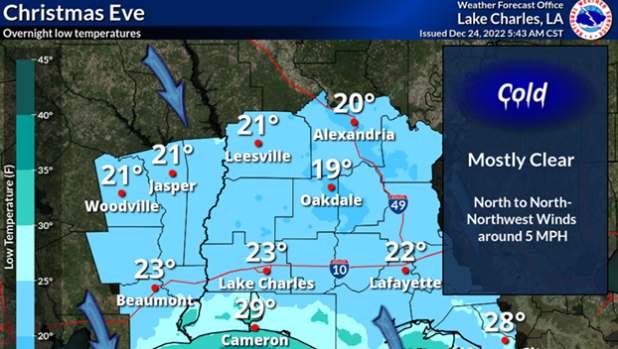 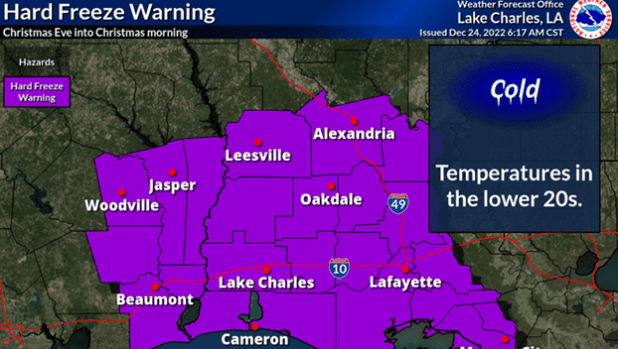 However, another hard freeze is expected Saturday night into Christmas morning.

The impacts of the hard freeze will be low temperatures in the teens to lower 20s.

These temperatures can burst pipes and kill tender vegetation.

All of Southeast Texas, as well as, central, south central and southwest Louisiana will be impacted.

The hard Freeze Warning runs through Saturday morning, with another hard freeze warning for Christmas Eve night into Christmas morning.

Heavy winds that began Thursday left some of Southeast Texans without power, but for the most part, local areas fared well with the arrival of the arctic cold front.

Port Arthur City Manager Ron Burton said city personnel prepared for the cold as best they could and as of Friday morning he had not heard of any major issues.

There were people reporting water line breaks, but none were serious, he said.

“We sent out as many (public service announcements) as we could to the community to make sure they themselves are prepared as best they could,” Burton said.

Preparation for the cold had a lot to do with communication. All city departments were alerted, and essential and nonessential workers got together for the dissemination of information.

In addition, employees made sure equipment was properly staged and any necessary repairs were made ahead of time.

Contractors were placed on notice and prepared in case the city had a major break, he added.

“I think we were very much prepared,” Burton said.

Nederland City Manager Chris Duque said Friday morning the city did not have any issues with the arctic front.

Duque said he spoke with staff and it appears the city weathered the cold.

“The biggest concern on our end is the city’s infrastructure, mainly the water,” Duque said. “We know what happened in 2021 and continue to ask people to conserve water, if they can. It’s going to be a rough day (Saturday) and should hit just above freezing.”

Water line breaks would be noticeable once the temperatures warm back up, he said.

Duque said the city learned some lessons from 2021’s major freeze, so in preparing this time around, they made sure the water towers were fully charged and went through city facilities to make sure they could handle the cold.

The city has also been sending out public notifications this week to alert residents of the impending hazardous weather.

Notifications were sent out in English and Spanish in order to reach as many people as possible.

The city also has additional crews on standby; the on-call staff is prepared for this, he said. Unfortunately, he said, they understand they may need to work Christmas Eve or even Christmas.

Municipalities across the area have been tuning in to statewide calls from the Texas Division of Emergency Management as the weather system approached. Duque said the calls come for most major weather events. The calls are updates on weather and other pertinent issues.

The arctic blast left approximately 17,680 Entergy Texas customers without power, according to a new release.

“The localized outages are related to windy conditions affecting main line and neighborhood circuits,” Entergy reported. “Texas power generation resources continue to operate as expected, and crews are working around the clock to safely restore power as quickly as possible.”

The arctic air mass will stay around into Christmas weekend with hard freeze conditions expected, according to the National Weather Service Lake Charles.

Christmas Day temperatures will reach 46 degrees with a low of 30 degrees.