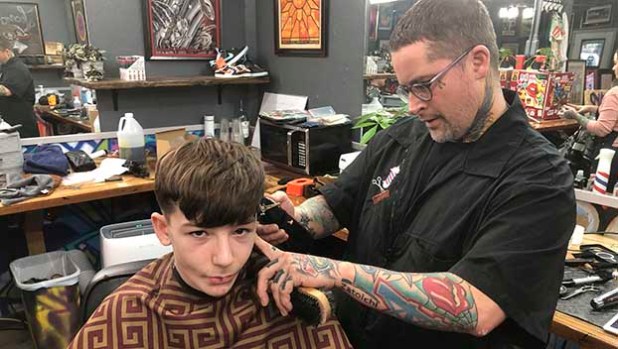 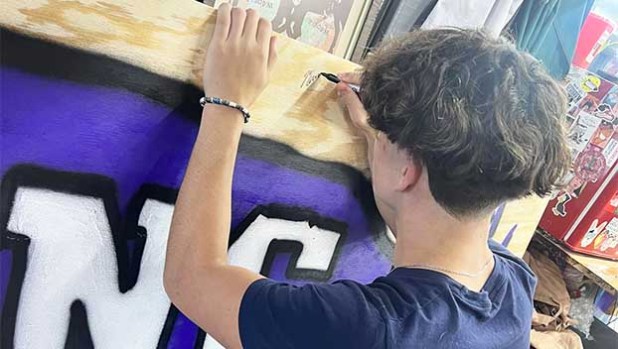 Manuel Ogden was the first PNGHS football player to sign the board at Johnny B’s Barber Shop in Nederland. (Courtesy photo) 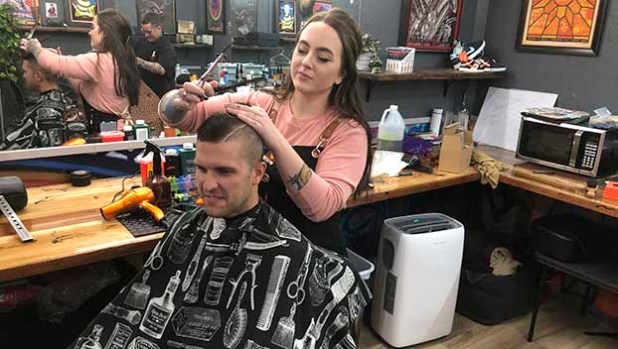 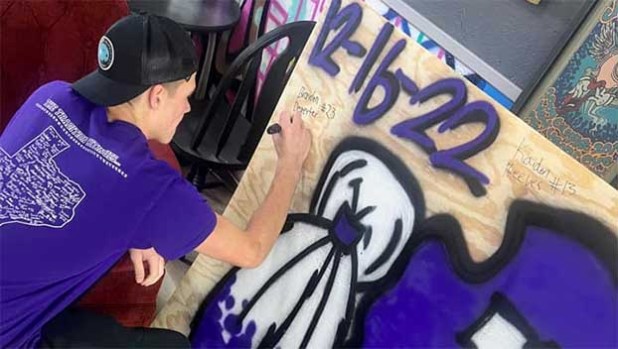 Brayden Degeyter signs the board and will be eligible for free haircuts for life. (Courtesy photo) 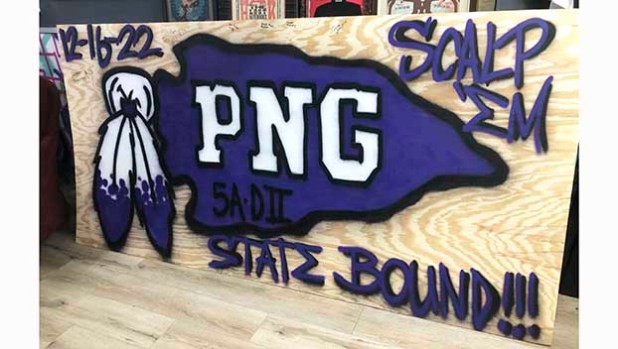 NEDERLAND — Johnny Badgett remembers attending the Port Neches-Groves High School state championship game in 1999. His dad was a fan of high school football, and the two traveled to the Astrodome when Badgett was 13.

So when PNG solidified another trip to state, the man better known as Johnny B the Barber wanted to find a way to mark the moment.

Now leaning against the wall of his barbershop on North Twin City Highway is a large sign painted for PNG, which is steadily being marked with the signature of football players.

But that signature comes with more than just notoriety.

“I commissioned Cole Beck from Gold Leaf (tattoo studio) to make the board for me. He’s a close friend of mine, and we do each other favors,” Badgett said. “And as I was telling him, I was like, ‘Oh yeah, and I’m going to give them free haircuts forever.’ And he said, ‘Dude, that’s really awesome.’”

But it doesn’t stop with just the players. The invite extends to “anyone that had a part in this team,” from coaches to bus drivers.

“I just thought that would be great,” Badgett said. “It’s just something else, win or lose, that they can have forever. If they end up living around here, they always know that they can come here.”

Community support has been a goal for the barber since he first opened the door of his shop.

“The whole goal is that I like cutting these kids’ hair — 1 year olds, 2 year olds,” he said. “I’ve already been here three years, so there’s kids that I’ve cut from their very first haircut until now and they’re already 3 years old. It’s incredible. If I can start with them and then they bring their kids in here, that’s amazing. That’s really what I want.”

Badgett attended the game at AT&T Stadium in Arlington last weekend. He had appointments booked until noon the day of, and drove to the game after. But with appointments beginning at 8 a.m. the following day, he drove back once the game ended.

“I had like nine Red Bulls in the car,” he said. “I walked in the next day and Hannah said, ‘You look like you just opened your eyes for the first time.’”

Hannah Bossier has been working at Johnny B’s Barber Shop since September. Originally from Orange, she had been living in Denver for six years before returning to Southeast Texas and said her time cutting hair at the Nederland shop has been good.

“Me and Johnny get along really well and I’ve met all his clients,” she said. “It’s a good vibe in here. Everyone gets along, and it’s really nice.”

Badgett said his goal is to have three shops, one of which would be completely free to clients.

“Anyone in need (could) come in any day of the week and get a free haircut,” he said. “That’s what I’d like to eventually have.”

For now, that starts with the 2022 PNG football team, and will continue for each team that makes it.

“This coach is amazing, this guy that they have,” he said of Jeff Joseph. “And this is his first year as the head coach of a football team. So if they go next year, the same thing will happen. If my week is booked up to where I’m just doing ex-football players’ haircuts, that will be fine.”

And the same offer will be extended to Nederland High School any year they make it to state.

Like his partnership with Beck, Badgett is also working on creating connections with local businesses. The Golden Cup, located on Boston Avenue, will be serving coffee at the shop on Saturday mornings.

“What was cool was…that was their first morning,” he said of the Saturday he returned from Arlington. “So it could not have worked out any better. I came in the shop and there was hot coffee.”