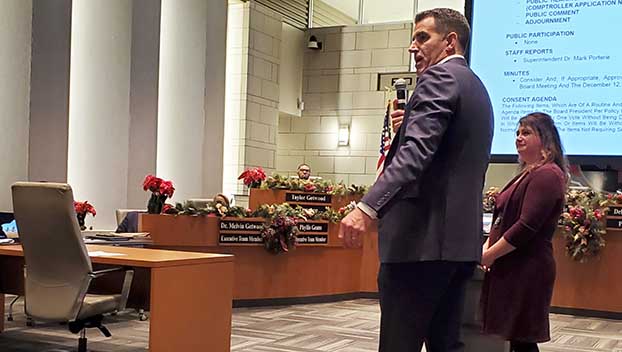 Part of the plan was agreements with Port Arthur Independent School District, which include creating a Reinvestment Zone and a tax agreement that benefits both entities.

SABIC is 70-percent owned by Saudi Aramco, and Motiva is a wholly owned affiliate of Saudi Aramco. The project will be at the Motiva fence line.

PAISD hired O’Hanlon, Demerath and Castillo as special counsel to assist with the application submitted by SABIC. Amalia Hanley, with ODC, said under normal circumstances, the company would have approached the City of Port Arthur and Jefferson County for tax break agreements but since the state statute governing school districts expires Dec. 31, the company had to make PAISD the first stop in the process.

The Reinvestment Zone only draws a line on a map, Hanley said, and the proposed facility will have the same boundaries as the Motiva property. 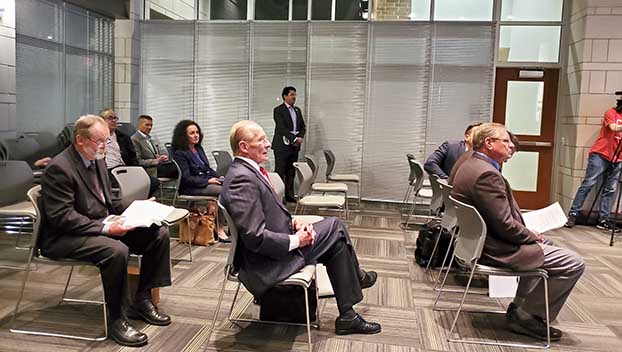 Individuals associated with SABIC and other local refineries sit in the audience area during the school board meeting. (Mary Meaux/The News)

SABIC is expected to start construction in the fourth quarter of 2023. It will take four years before it becomes fully operational. Officials are anticipate going online as of Jan. 1, 2028, Hanley said.

Trustee Taylor Getwood asked Hanley about the number of jobs the project would create.

“Over a 4-year period it will ramp up to over 1,000 jobs,” she said. “Permanent jobs, they are committed to 10 because that is what the minimum statutory requirement is. What we discovered is what the comptroller calls a job and what the rest of the world calls a job are two different things.”

The number of local people hired, local vendors and other such details will be worked out with county agreements.

Hanley said the initial value of the facility will see about $1.5 billion added on the local tax rolls.

“Beyond just the jobs that will be coming, is you’re able to leverage to either lower your tax rate or pay off your debt faster and you have those significant savings,” she said.

“But why would you give this taxpayer a break and not the entire community?” she asked.

“When you attract a project such as this, you do give a tax break to the entire community because you are able to leverage this new value without having to go to your homeowners,” she said.

The district is looking to receive an additional $25 million in funding that is outside of the school finance system.

Greg Skelton, SABIC head of government relations, Americas, explained the company has been in the United States for more than 30 years and in 2007 bought GE Plastics.

SABIC has also partnered with ExxonMobil with a project in Corpus Christi that started production this year, he said.