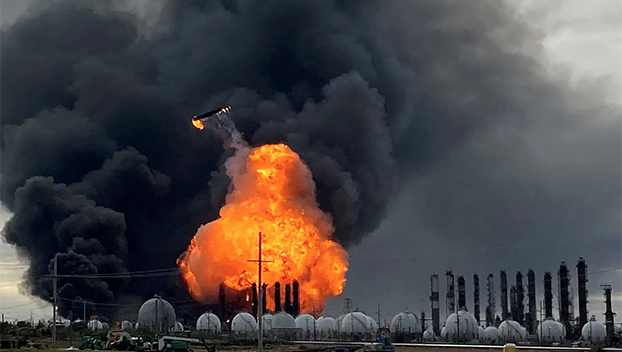 A process tower flies through air after exploding at the TPC Group chemical plant in Port Neches in November 2019. (REUTERS/Erwin Seba)

For more than 100 days in 2019, a dangerous chemical material was expanding inside a 16-inch-diameter pipe at a Port Neches chemical plant — rapidly forming into a sort of toxic popcorn, pushing against the metal walls.

The night before Thanksgiving, that pipe suddenly ruptured, allowing 6,000 gallons of liquid butadiene — a highly flammable petroleum-based chemical used in plastic production — to come gushing out in less than a minute. The butadiene instantly vaporized into a cloud, ignited and caused an explosion just two minutes later. The blast was felt up to 30 miles away.

The U.S. Chemical Safety Board, an independent federal agency that investigates chemical incidents, found in its final investigation of the 2019 explosion at the TPC Group LLC plant that the company failed to identify problem areas where dangerous “popcorn polymer” might build up and never implemented a safety recommendation to regularly flush pipes connected to out-of-service equipment.

Investigators found that the popcorn polymer had accumulated in a pipe connected to a pump that had been taken out of service for several months. The materials “exponentially” expanded until the pressure was too great and burst the pipe.

“The incident at TPC was the result of a known safety hazard — popcorn polymer — that was poorly managed and controlled at the facility,” said Steve Owens, the chair of the CSB. “The result was a catastrophic incident.”

In a statement, Sara Cronin, TPC Group’s vice president of communications and public affairs, said the company has invested millions of dollars in improving equipment and safety programs since the explosion, and implemented a program to review systems for mitigating butadiene hazards.

“Although TPC does not agree with every aspect of the final report, we look forward to working with the CSB to implement the agency’s recommendations,” Cronin said.

The company has either permanently eliminated “the large majority” of unused pieces of equipment that could present similar safety hazards in its Port Neches and Houston facilities or implemented an auditing process, Cronin added.

The massive explosion at about 1 a.m. Nov. 27, 2019, damaged nearby homes and buildings, and was followed by two more explosions — one a little more than an hour later, and another that afternoon around 2 p.m., which sent one of the chemical plant’s towers flying into the air.

Nearby residents were forced to evacuate that afternoon, and days later were instructed to shelter in place. Local schools canceled classes after the explosion damaged school buildings or showered them with debris. The blasts caused $153 million in off-site property damage.

The butadiene unit at the plant was completely destroyed by the explosions, and butadiene production remains shut down, according to the CSB. Contained chemical fires at the facility burned for more than a month.

Three years earlier, in 2016, an internal hazard analysis at the facility recommended piping connected to out-of-service equipment be regularly flushed. But the recommendation — which likely would have prevented the 2019 explosion — was never implemented.

The CSB also determined that TPC did not have sufficient internal policies to instruct employees to shut down and clean butadiene units after they experienced high levels of hazardous popcorn polymer. The facility was also missing remotely operated emergency isolation valves, which could have minimized the subsequent explosions.

Federal investigators recommended that the company implement processes to better manage “dead legs,” or defunct pieces of equipment in the facility that pose safety hazards. The CSB also recommended that the American Chemistry Council, an industry group that also develops safety manuals used by the chemical industry, revise its butadiene manual to include guidance on identifying dangerous amounts of popcorn polymer in a unit.

In 2020, Texas Attorney General Ken Paxton filed a lawsuit against the company, and in 2021, the Occupational Safety and Health Administration fined the company $515,000 for exposing employees to workplace safety and health hazards during the fire and explosion.

TPC filed for Chapter 11 bankruptcy and reached a $30 million settlement with some creditors earlier this year. On Friday, TPC emerged from bankruptcy and eliminated more than $950 million of the company’s $1.3 billion in debt as well as more than 11,000 explosion-related litigation claims, according to Baker Botts, an energy law firm that represented TPC through bankruptcy.

Written by Erin Douglas of The Texas Tribune is a nonpartisan, nonprofit media organization that informs Texans — and engages with them – about public policy, politics, government and statewide issues.