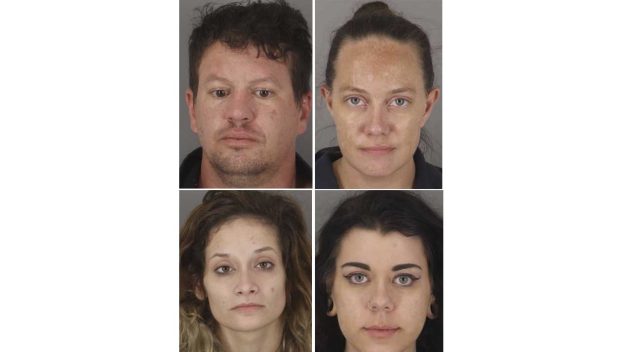 NEDERLAND — Four people arrested on drug charges and warrants relating to a local business have bonded out of jail.

The crimes for which the individuals were arrested for Nov. 1 and on Dec. 8 stem from an ongoing drug investigation, Nederland Police Chief Gary Porter said.

Police stopped a vehicle Nov. 1 that was driven by Kayla Sheldon, 24, with Whitney Williamson, 36, as passenger. The women were reportedly joyriding in a vehicle that belonged to a customer at Nederland Garage where the two women work.

Porter said the employees did not have permission to drive the vehicle.

Sheldon was arrested on two warrants and released Nov. 3 for time served.

According to information from the Jefferson County Sheriff’s Office, Sheldon was jailed on an active warrant for unauthorized use of a motor vehicle with bond set at $8,000.

Williamson was arrested on a state jail felony charge of possession of a controlled substance, with bond at $5,000. She bonded out Nov. 6. She also has an active warrant for driving while intoxicated from a previous incident.

The investigation continued, Porter said, and on Dec. 8 officers executed a search warrant authorized by Judge Justin Sanderson at a home in the 1000 block of North 30th Street, which is the home of shop owner William McCall, 38.

While there police reportedly recovered suspected methamphetamine, along with suspected heroin and marijuana. Police also recovered firearms at the scene. McCall was arrested on two charges of possession of a controlled substance with bond at $15,000 each. He bonded out of jail the next day, Dec. 9.

Kristina Polanco, 26, was also arrested at McCall’s house on a charge of possession of a controlled substance. Bond was set at $5,000 and she bonded out the next day.