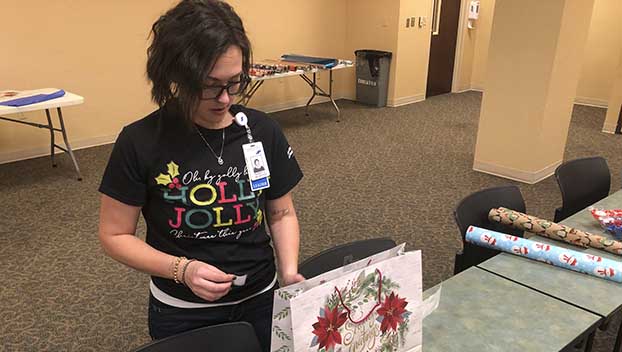 Kasey Sloan, clinical recruiter at The Medical Center of Southeast Texas, assembles gifts Wednesday at the hospital as part of their annual initiative to supply presents to children in care of Child Protective Services. (Monique Batson/The News)

Nearly 100 children under the care of Child Protective Services are getting gifts from Santa Claus after the Medical Center of Southeast Texas team members completed their annual holiday initiative.

As they have for more than three decades,  employees from the hospital helped wrap the last of the gifts that had been purchased by staff members.

“Last year we probably had 30-something employees that came in and out during their times to help wrap,” said Kasey Sloan, clinical recruiter. “This year we do have a larger number of children than we did last year.”

Hospital employees took on 88 children this year — 16 more than 2021. Each one, ranging from one month old to 14 years old is under the custody of CPS due to abuse, neglect or other related reasons.

“Even with inflation and workforce issues, we were able to get all of the kids adopted in a week’s timespan, and everybody has presents,” Sloan said.

It’s been a longstanding tradition for the hospital employees.

“We’ve done it for 33 years and we have to be in the thousands of kids we’ve served,” said Stacy Terrell, social worker. “This is their Santa Claus. We don’t put that it’s from the hospital.”

The staff receives slips of paper for every child with their first name, age, gender and items of want and/or need.

“We had a one-month old and they requested a crib,” Sloan said. “We try to make sure if there are needs on there, that we get those met,” Terrell said

The project began at Park Place through former employee Joan Sheehan, who had also worked for CPS.

“The Medical Center has always been a huge supporter of the children in Jefferson County, and we’re very proud to be associated with an organization like theirs,” said Sheehan, chairperson for the Jefferson County Child Welfare Board. “This year, they are one of our biggest contributors. We couldn’t be more excited about the partnership.”

“It’s been completely supported,” she said. “Over the years it has become like a family tradition, because we are so deep in families here. It says a lot about the employees and their willingness to participate, give and support.”

In addition to Christmas presents for CPS children, the Medical Center of Southeast Texas hosts food drives, community baby drives and back-to-school events among others.