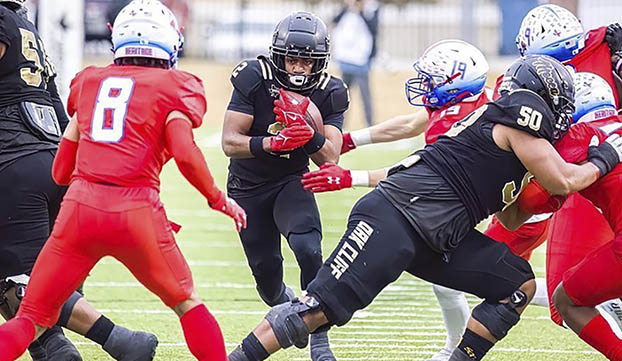 PORT NECHES — It has been a stout playoff run for the Port Neches-Groves Indians to say the least.

The Indians (13-2), led by first-year head coach Jeff Joseph, have sat down some of the most highly-rated opponents along the way, beating ranked teams LBJ Austin , district rival Fort Bend Marshall and, last week, a huge 42-14 semifinal win against a tradition-rich Liberty Hill.

The only team that stands in the Indians way are defending Class 5A Division II state champion Dallas South Oak Cliff Bears (12-3). The two will duke it out Friday night at 7 p.m. at Arlington’s AT&T Stadium.

“Not too many teams know when they will have their last practice of the year, but our kids know we have three more now,” said Joseph after Friday’s win. “It’s an awesome feeling, and I’m so excited for our seniors and our community right now.”

It was tough sledding in the early going for the Bears, who arguably played the toughest non-district schedule in the state.

The Bears gained momentum after that, winning 12 straight. They cruised past their six district opponents, outscoring them 302-10.

Oak Cliff has had their mettle tested in the postseason as they have won several nailbiters against formidable programs, just like PNG.

They nipped Mansfield Summit 12-7 in bidistrict. They held off Lucas Lovejoy 42-37 in the area round. They then came up with big plays late to subdue Midlothian Heritage 42-37 in overtime.

The Bears took care of Melissa 30-16 in their regional final and then fought off powerhouse Argyle 14-6 in the state semifinals in the fog at Crowley Stadium last week.

Coach Jason Todd and the Bears staff have had plenty of experience in big games. Since Todd took over the program during the 2014 season, the Bears have compiled a 91-26 mark, with their worst record of 8-4 coming in the 2015 season.

Oak Cliff has at least reached the second round of the playoffs the last nine seasons.

The Bears have utilized a slew of skill players on offense, as it has been hard for opposing defenses to hone in on any specific superstar. They like to run the spread for the most part but have tended to lean on their run game to control the tempo. The Bears are averaging 352.5 yards a game, 249.1 on the ground and 103.4 in the air.

As a matter of fact, the Bears have utilized three quarterbacks this season.

The Bears spread the wealth in the backfield.

Senior Corinthean Coleman leads all Bears receivers with 22 catches for 366 yards and a TD. Jamyri Cawley has 19 catches for 309 yards and four scores, while Joshua Manley has 18 catches for 281 yards and two TDs.

The Bears have made key plays on defense, especially late in games in the postseason. However, last week they may have saved their best for the semifinal. Argyle entered with a 14-0 mark, but the Bears defense held them to 188 total yards and just 87 yards on the ground.