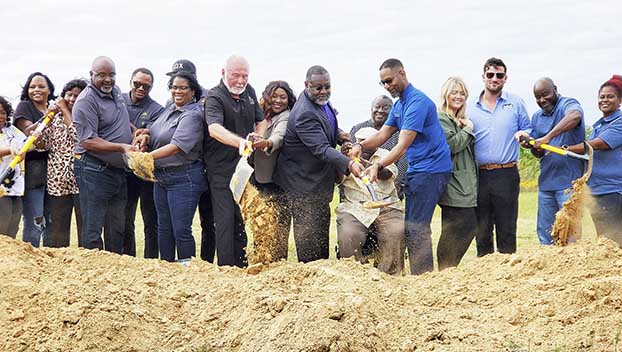 Located near the corner of 39th Street and Tallowood Drive and including 46 single-family homes, the subdivision will feature homes starting in the $200,000 range.

“We kept working on it, trying to do it, then all of a sudden (business partner Mike Rebcesher) came to me and said, ‘Chuck, let’s do it,’” McElroy told Mary from his League City home.

Five days later, Mary was one of the only media members there in person when McElroy came home for a ground breaking flanked by supporters and family, including generations younger and older than him.

“This is a dream come true,” McElroy told the crowd. “This is home. Port Arthur’s home for me and always will be. I’m looking forward to not just this project but many projects.”

Some of the people in the crowd included Mary and Cordell Lindsey, along with daughter Gina Lewis. That was especially special because Cordell Lindsey coached McElroy at Lincoln High School. 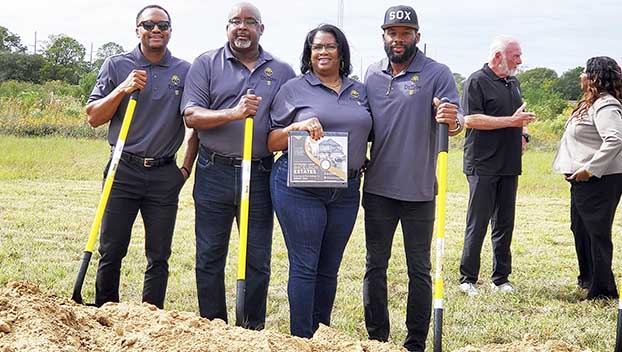 It was truly a full circle moment for an educator and our community.

That wasn’t lost on Mary Meaux, who already cornered the news angle market of McElroy Estates. She sought out more, and set out to get that story, too.

What she learned from an additional in-depth interview with the businessman and former professional athlete is McElroy played baseball, football and basketball at Lincoln High. Lindsey took the young McElroy, who was raised by a single mother, under his wing and taught him how to play sports, how to work hard and how to be a man.

The results produced decades of success and promises years of reinvestment.

He explained how during a pre-draft workout for the Philadelphia Phillies at “140 pounds looking like Urkel” McElroy blew away the scouts.

He remembers the send off at the airport with his family and coach after being drafted in the eighth round.

Mary’s complete story is featured as the cover spotlight in Volume 6 of Greater Port Arthur The Magazine, which is on newsstands now.

Another cool feature in the current issue goes behind the scenes with Carolyn Thibodeaux, who is the children’s librarian at the Port Arthur Public Library.

As she was getting into her car and talking to a local reporter, she made a comment about not feeling 61 years old.

“It’s working with children,” she said while smiling. “It keeps you young.”

On the wilder side of life is Jim LaBove, a true Cajun (Acadian) and a Cajun Preservationist. He has authored and illustrated five books on Cajun life and is currently drawing illustrations for his sixth book due this Spring.

He is a 1970 graduate of Lamar University with a double major in History and English and has lived in and around Jefferson County for most of his life.

These three “personality” profiles are just part of a deep and insightful magazine edition packed with local photos and plenty of charisma…kind of like the community we all share.

It’s a joy to live here and report on our many positives. It’s why we began publishing Greater Port Arthur The Magazine approximately 10 years ago.

Volume 6 includes numerous stories celebrating family links, triumph from adversity and those actively making a difference in our community.

These are important stories and would not be possible without the support of advertisers and sponsors. Please consider their goods and services in the future.