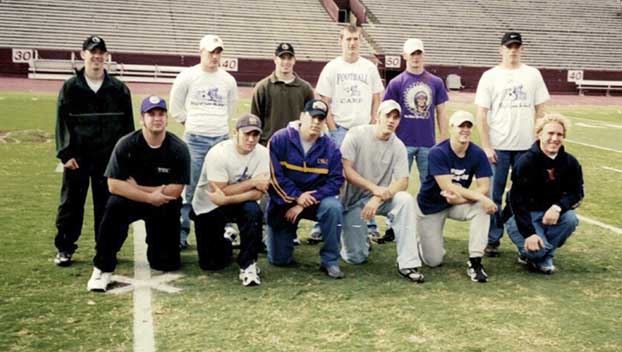 PORT NECHES — The 1999 PNG football team was the last group to make it to the Texas high school football semifinals.

The Indians defeated Schertz Clemens 16-13 to advance to the state championship game that season, where they fell to Stephenville 28-18. The program’s current run has given the former student-athletes an excuse to dive into the past as they cheer on this year’s squad, who takes on Liberty Hill in Katy Friday night for a chance to go to the 5A Division II title game.

Blake Hopper played tackle for the ’99 team and said his dining room table has turned purple from all of the old newspaper clippings and t-shirts from that run.

“Playing for the state championship was an experience like we will never have again in our lives,” Hopper said. “I remember the semifinal game against Schertz Clemens and the drive. It was one of the happiest times I have had in my life. We are all still super close to this day. Even if we don’t see each other all of the time, we pick up like we never skipped a beat. It is a bond we will have for life.”

Hopper said that unbreakable bond was forged in the Texas summers of training camp and is the main reason the team made the run it did.

Thomas Baxter, who also played on the ’99 team, sees plenty of similarities between the two eras — most notably is the path the two teams took to get to this point.

In 1999, PNG wasn’t favored in the majority of their playoff games. In the quarterfinal, PNG took on LaMarque, who had quite the track record of sustained excellence with multiple state title appearances.

Baxter said that sounds familiar to the Fort Bend Marshall team that PNG beat last week. But the similarities do not stop there.

“I remember everyone doubting us and being able to prove them wrong,” Baxter said. “We were a really good team. I was talking to some friends of mine and I told them it is crazy that they are playing Liberty Hill, who is a run-heavy team. They run a similar offense that Schertz Clemens ran. It has been neat to see those parallels.”

“That was the best offensive line I faced in 37 games on varsity,” he said. “I came out of that game beat. It was rough. We followed the “bend, but don’t break” rule. I think that is going to happen again this week.”

Boudoin said he doesn’t think the ’99 team knew how good they were in the moment.

“We were just trucking along during district and got hot,” Boudoin said. “We lost to West Orange-Stark in the season. Once we did that, we took off. I guess we got what it felt like to lose a game and didn’t want to do that again. It galvanized the team and we didn’t look back. We got better and better each week.”

All three said they have enjoyed watching this year’s run and hope this team is able to finish what they started more than 20 years ago.

The last time PNG won a state championship was 1977.