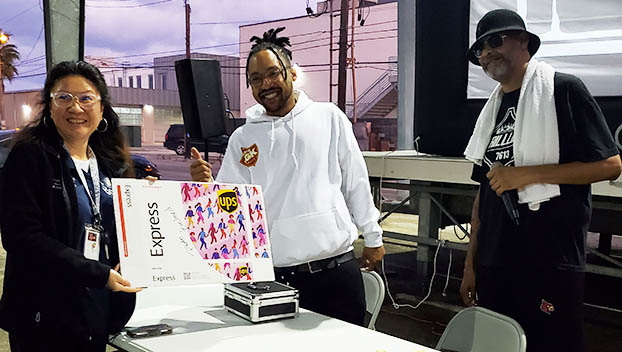 Nuong Tran, left, is presented with a door prize from Chad Butler Jr., with DJ. Bird on the right at UGK Day last week in Port Arthur. (Mary Meaux/The News)

My youngest son, now a sophomore in high school, has always had a soundtrack to his life. If he’s not wearing headphones, he’s blaring music through his phone or television while going about his everyday tasks.

And one thing I’ve always prided myself on was his knowledge of 90s rap music. During last year’s Super Bowl halftime performance, both of my children out sang me to every Dre, Snoop and Eminem song.

So the first time the Port Arthur City Council was approached about celebrating an annual UGK Day, he was one of the first people I told.

And my child responded with, “Who is UGK?”

For at least two minutes, I stared at him with a cartoon blink — the kind that’s almost animated where you can hear your eyelids closing to “dink, dink” noises.

And then we pulled out the playlists.

I played a song and within a few notes he said, “wait, I know that song.” I played another and was met with the same response.

He had spent years listening to music that was born in the same area he was without knowing.

But it was while roaming the Museum of the Gulf Coast this week that I began to understand how easily those of us from Southeast Texas can take for granted the talent that hails from this area.

I remember the first time I met Tracy Byrd. He was getting fitted for custom boots at a locally owned business in Lumberton, and I was profiling the man who hand made each pair of boots.

My mother’s first question was, “Did you get a picture?”

Of course I took pictures. It was for a story.

“But did you take a picture with him?”

Oh. No. That hadn’t occurred to me.

Here, Tracy Byrd is a household name. But I forget in other places, there are people with his posters on their wall.

(Much to my mother’s delight, the next time I was in the same place at Tracy Byrd, we took a picture together.)

While driving to an assignment a few months back, I was following my Google Maps app when I saw “Janis Joplin’s Childhood Home” on the screen. And before I knew it, I was parked in front of the place where a rock legend had once lived.

Browsing the Museum last week, I was marveling at the display for Home Free member Tim Foust. I had watched him on NBC’s “The Sing Off,” where the addition of his deep bass notes drove my oldest child into a month-long obsession over Johnny Cash.

To my son, the man on the screen was a television star. To me, he was a former classmate. We graduated together. Of course that didn’t diminish his talent. But I had been aware of his vocal gifts since school, where I listened to him perform with Ned and Co.

While at the PNG football game last Friday, I listened to the crowd chant Roschon Johnson’s name as he walked up to the press box. Now he’s known as the Mid County quarterback turned University of Texas football standout, but I remember watching him play football when he was in middle school.

There is no denying that Jefferson County is rich in influential people.

While previewing last week’s inaugural UGK Day celebration, I had the chance to speak with Mitchell Queen, who was part of the group’s formation.

The 1991 Lincoln High School graduate was friends with Chad “Pimp C” Butler, and later introduced him to Bernard “Bun B” Freeman.

“I always knew we had the talent and abilities to become what we did, but it takes more than talent to become what we became,” he told me. “It wasn’t really our doing. We were just doing what we love. I believe what we were doing was God’s plan. It was fate.”