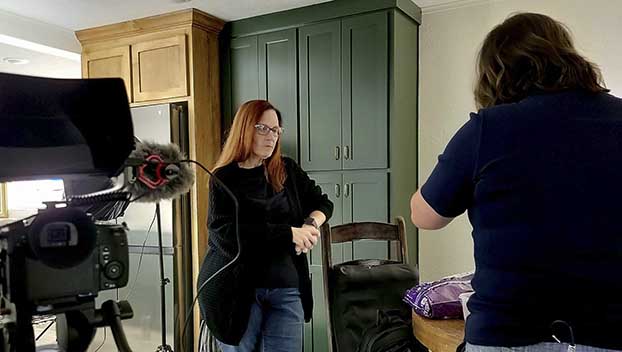 Studio 220 Films, which is part of One-Eyed Jacks Production, films in June in Groves. (Courtesy photo)

GROVES — A Groves man who is filming a faith-based short film got the green light from city council to use a Groves park for a scene.

Jerry Loncon, with One-Eyes Jacks Production under which Studio 220 Films is working, approached council with the request because the scene requires the use of a realistic looking pop gun.

The upcoming film, “The First Step,” will have a run time of 25-30 minutes. The plot follows a man who struggles with his faith after a tragic incident.

Loncon’s main intent was to assure the council of safety measures taking place regarding the weapon.

“We plan on making a lot more films in the future, as well as a TV series that we’re pitching to streaming platforms, so I want to start here doing things the right way and not just try to run and gun — run in there and film it and run away,” Loncon said. “And because of the world we live in now, you don’t bring out a pop gun.”

Ricky Jimenez, founder of Guard and Defend Firearms in Silsbee, alluded to the 2021 death of cinematographer Halyna Hutchins, who was killed during filming of a movie when a gun, thought to be a prop, was discharged.

Loncon reached out to Guard and Defend Firearms in hopes something like that would never happen again, Jimenez said.

Jiminez said a gun would be provided that has the firing pin removed.

The gun will be in Jiminez’s possession between scenes and be checked multiple times.

Mayor Chris Borne asked Loncon if he has insurance to cover the people who will be working with him, to which he said he did not.

“If anyone was to fall or get hurt on the park property, do you have anything to cover them or are they going to be suing us?” Borne asked.

Loncon said the people involved in the filming have signed a waiver, adding nothing negative will fall to the city.