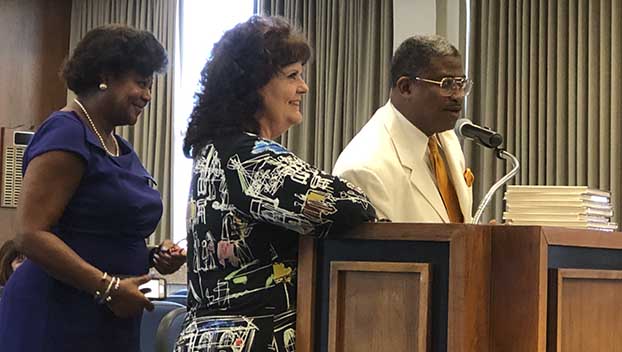 The future, officials say, is the key to preserving the past, as plans for the upcoming Quasquicentennial Celebration begin to take shape.

“The Quasquicentennial Celebration is one that brings opportunities for us to bring in a diverse blend of citizens and community representatives that are from all walks of life,” said Verna Rutherford, one of three celebration committee members who addressed the Port Arthur City Council Tuesday afternoon. “That is one of the most important things that we get to do is to bring in that blend of rich culture and history and help to share what has happened over the last 125 years in this city with people who are here now who will be here long after us.

“Because a few of us who were on the Centennial Committee probably won’t be here for the next…celebration. And so it’s important for us to bring in youth, and to educate the youth. And that’s a big part of what’s incorporated into the plans.”

The intent, Rutherford said, is to leverage existing activities and events already planned for the city to maximize efficiency while also adding new ones.

“We’re not going to go through everything that’s being planned for celebration, because we don’t want to steal the thunder from when that plan is unrolled down the line,” she said. “But one of the things we thought was particularly intriguing was the fact that (there are) historical markers all over the city. We all drive by them, and we don’t realize what’s on them.”

Committee members are working on a way to highlight those markers in a way that brings them forward, among other ideas that bring attention to Port Arthur’s 125-year history.

“Your library is filled with a wealth of information,” Rutherford said. “If we had even tried to open every book and file, we would have been there for a year. So we were wise enough to know that we needed to pull in historical resources that know that information. You’ll be happy to know that two of those young people, or two of those historical advisors, are two very young ladies that work for you at the library.”

The focus, she reiterated, is to carry forward the history while getting the city involved, which includes local school districts.

“That’s going to be an important element — not just to celebrate and plan for what we’re doing next year, but to educate so those coming behind us will be able to be standing here in 25 to 50 years,” she said.

One of the first events planned for the Quasquicentennial Celebration is the Greater Port Arthur Chamber of Commerce’s annual banquet Jan. 26 at the Robert A “Bob” Bowers Civic Center.

It will be the 123rd year for the banquet, which features Port Arthur native and actor G.W. Bailey as the guest speaker. The Arthur E. Stilwell Award will be presented to Port Arthur Independent School District Superintendent Mark Porterie.

“I am almost sold out already. It’s going to be probably the biggest annual banquet we’ve ever had, and so I’m really looking forward to that,” said Pat Avery, CEO of the Chamber. “We plan to do something every month at the Chamber — a luncheon or a breakfast — to highlight the City of Port Arthur.