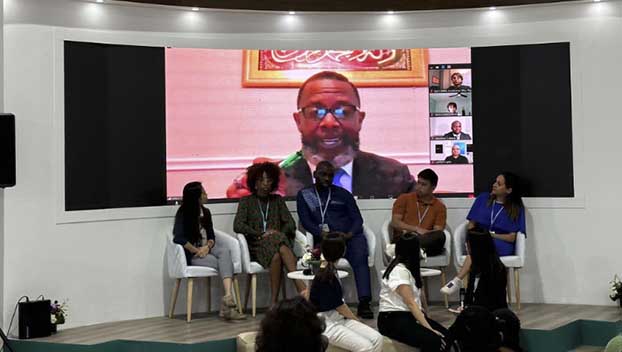 Rashaud called it an honor to address the student panel of ambassadors from Africa, Taiwan, North America and others and said they proved to be as astute as they were energized.

Rashaud is a senior board advisor for partnerships, investor engagement and sustainability strategy on the US-Business Council for Sustainable Development Executive Committee.

He also sits on the Texas A&M University National Science Foundation Louis Stokes Alliances for Minority Participation Advisory Board, the Prairie View A&M University Industrial Advisory Board and the Bossville Industrial Hemp Farms Board of Advisors, according to an article in US Black Engineer Information Technology Magazine.

In the article, he said a “central mission of the framework convention sought to build on the outcomes of COP26 for delivering executable strategies that are critical to tackling a multitude of climate change challenges-especially those which intersect at the Food-Water-Energy nexus including food insecurity, an ever-growing energy crisis, historic GHG emissions, and increased extreme climatic events.”

Rashaud said, unlike previous conventions of this status and import, the COP27 gave voice to oft-excluded and muted voices — Historically Black College and Universities.