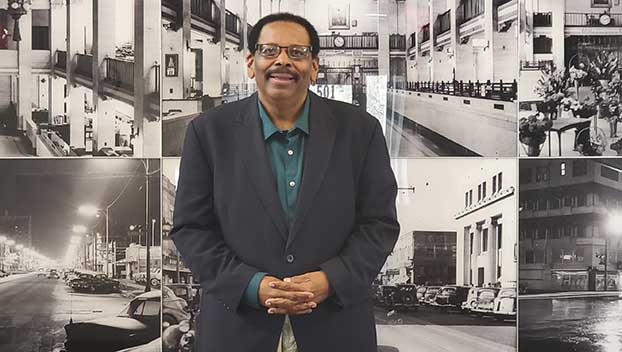 Terry Stokes is settling in as the new CEO for the Port Arthur Economic Development Corporation. (Mary Meaux/The News)

Terry Stokes has his feet planted firmly in a career field that he trained for his whole adult life.

The field takes his prior experience as a civil engineer, his work in computer-generated engineering and project management and melds them together to create the field of economic development.

Stokes is settling into his new position as CEO of the Port Arthur Economic Development Corporation. On a windy Wednesday he sat down and talked about the journey here and gave the definition of economic development.

A native of Virginia, Stokes has worked in North Carolina, California, Alabama and Texas.

“The curriculum of economic development is just now starting to enter in college, where you can get a degree,” Stokes said. “For the most part that was a field folks fell into. I’m a civil engineer by education, and it’s just that you end up on a journey and all of a sudden one day someone says you’re doing economic development. Really? It’s been an incredible journey.”

His first job out of college was with the North Carolina Department of Transportation as a planning and research engineer. This was at the time the nation was enthralled with computers, he said.

His wife finished graduate school at North Carolina State University and got a job with IBM in California, so the couple moved to the golden state. He ended up working for InoGraph Corporation, a computer aided-design company whose rival was AutoDesk, which makes AutoCAD.

He was later in charge of a brand new product called InRoads, which was sold to the department of Transportation and is still in use.

His career path led him to Norfolk State University as lead project manager, taking on a project to develop a research park.

“That’s when things started pulling together in the field of economic development and what I was doing started to meld,” he said. “Because now I’m being charged with bringing online the 25-acre research park. I’m dealing with the Norfolk Redevelopment and Housing Authority who owned the land that they’re going to turn over to us to take it out of blight and turn it into a research park.”

Then came talks of the benefits of the research park, what kinds of jobs are going to be spun from this project. There was discussion of a light rail station being added so people could park and take the rail to make their living. They would go shopping and generate sales tax, he said.

And by 2003 he had made the switch to economic development.

The job in Port Arthur is Stokes’ third stop on the economic development train with all such jobs being in Texas.

“Economic development is still kind of a tough field to explain to people, but the easiest way to explain it is, it’s everything,” he said.

This involves and is dependent on a large team of stakeholders to bring something together.

Diversification of the economy is a big part in the success of the area and something he is looking to. There is an opportunity to, over the next 10 to 20 years, bring online additional industries to come alongside the industrial base and look to the world like a well-rounded community, he said.

This will take strategic planning. Stokes spoke of how, last summer, Forbes noted 85 percent of the jobs that will exist in 2030 haven’t been invented yet.

Looking back to 2010, would one have thought there would be jobs such as with Uber and Lyft, he asked.

As for now, Stokes has plans to meet with upwards of 150 stakeholders in the coming months — three a day, 15 in a week, he said.

Port Arthur City Council approved the hiring of Stokes in October. He previously served as the executive director of the Yoakum Economic Development Corporation.

PAEDC members noted in a previous article they were pleased to have Stokes on board and believe he will get the organization back on track.