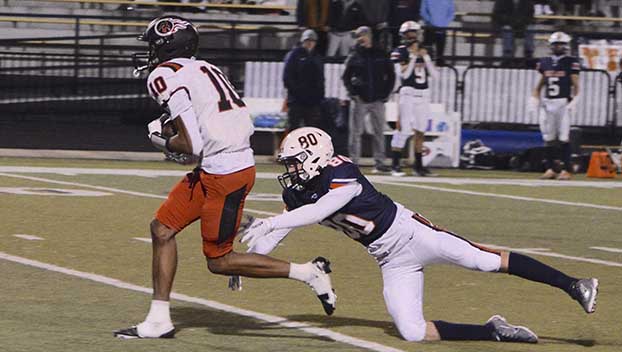 It is crazy what one season can do.

Coming into this high school football season, people were questioning if Memorial could get over the hump and win a playoff game. People were wondering if a first-year coach in Port Neches-Groves would be able to improve upon the success the team had the previous season by making it to the third round.

And just like that, questions were answered. Now, we have new questions, but they are more positive.

Is Memorial back? Perhaps it is too soon to tell. Does one run to the third round constitute any prediction on sustainable postseason success?

I think it does. I know anyone that looks at the final score of the game between Longview and Memorial and sees a 51-7 decision would not believe it was close.

But that score is not indicative of how much that game was in the balance early on.

The Titans scored on their opening drive and then stopped Longview on fourth down. The Titans turned the ball over three times in the first half and missed on a bomb that would’ve put Memorial up 14-3 in the second quarter.

If any number of things go differently in that first half, the game could’ve easily been different for a Longview team that really likes to run the football.

After the game, coaches and players felt like one got away. Many believed the winner of that game would eventually win the state title, given the lay of the land with the remaining teams.

As for the future, the Titans are losing some talent. Their best players are seniors, but they have plenty of young talent returning that should put them right back in contention for the next few years.

In Port Neches, first-year head coach Jeff Joseph entered into a difficult situation. He had to replace the coach who had the most wins in the school’s long history and had just taken the team to the third round of the playoffs the previous year.

The Indians went on to finish second in the district, which was an improvement from last season and are gearing up to play in the fourth round of the playoffs against district foe Fort Bend Marshall.

This is the first time PNG will play in the quarterfinals since 1999, which was also when the team when to the championship game.

The PNG defense improved while maintaining a quality offense, boosted by one of the better offensive lines in the state.

How far this team will go is yet to be determined, but it does seem to bode well for the program’s future.

The real coaching job for Joseph might comes next season after a mass exodus of seniors from this year’s team graduate, but that is high school football.

Right now, PNG fans get to ride the wave to the fourth round and potentially beyond.