Hospitality Center feeding more than ever this holiday season 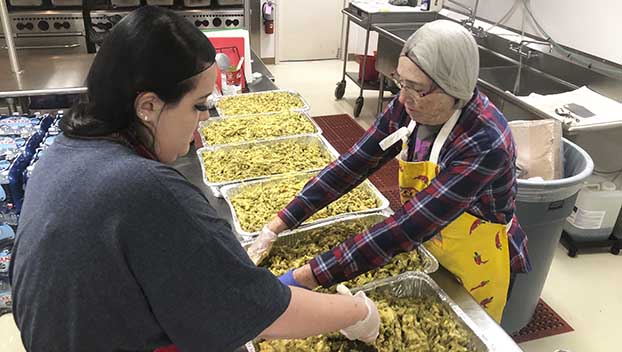 The kitchen at the Hospitality Center Wednesday was filled with as much gratitude as it was food.

Volunteers, both teenage and adult, happily mixed together pans of green bean casserole for the center’s annual Thanksgiving dinner.

Her daughter, 14-year-old Beatrice Ruiz, opened can after can of green beans.

Mary Leverett, 17, was mixing food as she has done at the center every Sunday and holiday for a year.

And Janet Polk assisted Leverett with stirring in the cheese, joining the team for the first time in years.

“I used to volunteer here,” she said. “We had our Thanksgiving last week and this week my kids and grandkids will be at other places so I thought I’d come out here and help.” 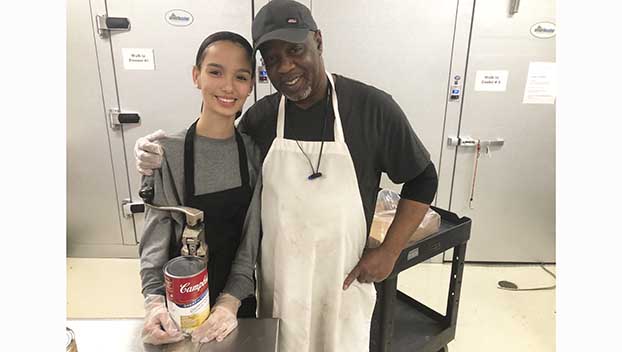 Along with other members of the center, the group is preparing to feed more people than ever before.

“This year has been totally different,” Green said. “We’re reaching that 300 mark. We’ve seen a lot of new faces. We were feeding an average of 150, but now it’s more. And we don’t know how many, so we’re just going to prepare for 300.”

That will include 30-35 turkeys. Some were already in the walk-in fridge, cooked on Tuesday by the Port Arthur Sertoma Club. And more were on the way.

Up to 10 pans of green bean casserole, yams and either broccoli cheese casserole or stuffing will also be made.

Today those experiencing homelessness can visit the center for boxed dinners that they can either take with them or eat in the dining area.

And Christmas Day will mark the center’s 35th year, although the new building on Gulfway Drive opened approximately a year ago.

“I’ve basically been raised here,” Ruiz said. “The center has always been a second home to me. I know everybody here. When I was little, my childhood friends were the volunteers here.” 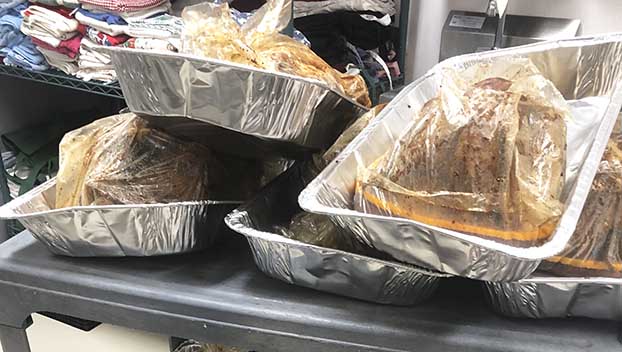 The Hospitality Center will serve about 35 turkeys as part of their Thanksgiving Day meal. (Monique Batson/The News)

Her mother has been with the center for 18 years.

“I’ve been raised in a Catholic community, helping out and knowing how to take care of other people,” Ruiz said. “My mom really sets a good example for everybody. I’m so proud that she’s my mom.”

Leverett has found not only joy, but life lessons.

“Ever since I started coming here I’ve learned to love cooking and love to volunteer. It takes my mind off things,” she said. “It would be good to bring kids that have a learning disability. If they want to learn how to cook, this would be a good place. First I started cooking without an oven. Then when I started cooking with an oven, Ms. Christina taught me and Mr. Ricky (Clabon) taught me. I’m just really grateful. Everyone deserves a good meal.”

Clabon is a cook at the center, but also a mentor.

When Green introduced her daughter, he smiled and hugged the teen.

“This is our daughter,” he said. “It takes a village to raise a child.”

The Hospitality Center is a Catholic Charities organization that opened on Christmas Day in 1987.

They operate 365 days a year and provide more than food.

They get donations of pet food from the Humane Society of Southeast Texas, as some people experiencing homelessness have animals as companions. They offer coats, clothing and bags of snacks for visitors to take so they have food to bring back once they leave.

On Christmas Eve, they will also have Santa present and a toy room for children to visit and pick a gift.