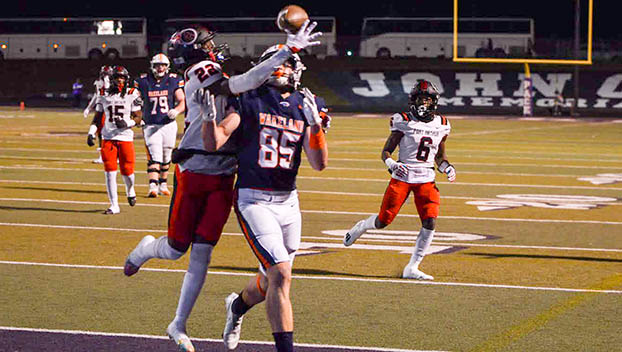 Daevon Iles (22) breaks up a potential touchdown catch in the first half. (Chris Moore/The News)

I have seen my fair share of memorable high school football games.

I was at Stallworth Stadium in Baytown for the 72-69 playoff game between Port Neches-Groves and Crosby in 2017.

I’ve seen plenty of classic games between PNG and Nederland.

The Titans’ 52-50 win over Frisco Wakeland Friday might go right up there with the 2017 PNG-Crosby contest.

The Titans already got over the hump by winning their first round playoff game this season, breaking a four-year drought. But there was more to come.

Both teams scored on their opening drives, but Wakeland’s offense seemed to find weaknesses or busts in Memorial’s coverage easier.

After the game, Memorial Head Coach Brian Morgan said much of the halftime adjustments centered around stopping the Wolverines’ tight end, who recorded 170 yards and two touchdowns in the first half alone. The adjustments worked and the Titans held him to 20 yards in the second half and overtime.

The first half also foreshadowed a bit of a weakness for the seemingly unstoppable Wakeland offense. The Wolverines made it inside the 5-yard line but was shutout on four consecutive plays. It seemed the Wakeland offense was better in space, but struggled once the field shrunk.

Fast forward to the fourth quarter, where both teams combined for four touchdowns in the final period of regulation, the last of which coming with 18 seconds left on the clock.

The Titans defense came up with a huge stop with under a minute left to force a punt that receiver Caleb Goodie returned to the Memorial 40.

A hobbled Davion Wilson returned to the field, where he had earlier been helped to the sideline after an ankle injury forced him to miss a few plays.

After a few plays, the Titans were on the Wakeland 34-yard line. Wilson dropped back and heaved the ball towards the end zone, where Goodie out-jumped two Wakeland defenders for the tying catch.

After the game, Wilson and Morgan said Goodie ran the wrong route, but ended up in the right place.

Press boxes are typically not a cheering section, but most in attendance couldn’t help but be in awe of the play.

That was just regulation.

The third OT introduced something I was unaware of until Friday night. Starting in the third OT, teams just go back and forth with two-point conversions until one team fails to convert and the other succeeds.

As mentioned before, short-yardage situations appeared to give Wakeland’s offense some trouble. Both teams failed to get it in the end zone in the third overtime. Wakeland failed on the first attempt on the fourth OT, setting up Memorial to end it. Wilson rolled to his right and seemed like he wanted to take it in himself but saw the defense closing fast. At the last possible minute, he tossed it to Ja’Quan Holmes at the right boundary of the end zone. The ref signaled for the score and the Titans’ sideline erupted on to the field.

After the game, Wilson admitted he was running on pure adrenalin that had long wore off as he exited the locker room with ice wrapped around his ankle. He threw for 343 yards, rushed for 118 and totaled five touchdowns.

His performance will go down as one of the better ones I have seen in a playoff game and should pull the attention of Division I programs.

That game is one for the books and is one that I will not soon forget.