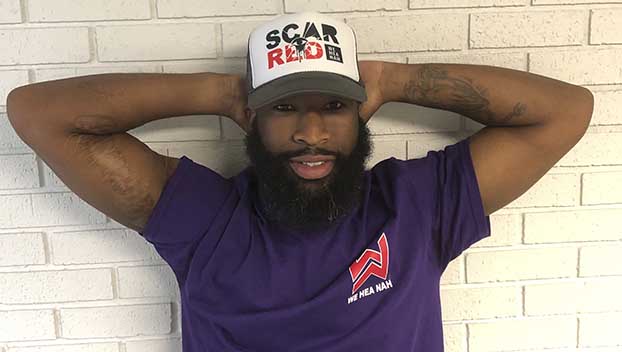 From the time he was young, DeForest Johnson was seemingly set for failure.

At first, living with his mother and two younger brothers in Natchez, Mississippi, it didn’t seem that way.

“My mom was a (certified nursing assistant). She had it going on. But at one point, I don’t know what happened, all of a sudden things changed,” he said. “We had it all. We had a good life. Then things changed. I think that’s when she started using drugs.”

Barely a teenager, Johnson had to take care of his brothers, flush toilets with buckets of water and spend days without his mother or access to food.

His father wasn’t, and still isn’t, in his life.

“It was tough,” he said. “I was being bullied, picked on all the time, because I really didn’t have much. I was dirty all of the time, wore the same pants and the same shirt, and different dusty shoes. It was just hard times for me, but it all boiled down to: hurt people hurt people. I feel like those people were being hurt in some type of way so they had to take it out on someone else. I was a quiet and shy kid that never really said much, so I just let it go on for years.”

In seventh grade he found salvation, and what he thought would be a future, on the football field.

“Football was my safe place,” he said. “When I was going through things in my life and I put my helmet on, I wasn’t going through those things anymore. It was like a light switch. I was a quiet kid without the helmet on, but when I got on the field I was a madman because I was dealing with so much.”

Ultimately he and his siblings were separated, and Johnson moved to Baton Rouge, Louisiana, to live with an aunt at the start of his freshman year of high school. However, they were forced to move back to Mississippi for two years.

“It was a hard time for her, as well, so she was just trying to find a way to take care of me and her son,” Johnson said. “One thing I loved about her is if both of us couldn’t have it, we weren’t going to get it at all. She made sure we had the things we needed, and she didn’t treat me any differently than she did her son.”

For his senior year, they returned to Baton Rogue, and Johnson became an All-State receiver. The college offers began to flow in.

“All I had to do was graduate high school and I would have had a scholarship,” he said. “But I feel like by me moving back and forth from state to state, I lost a lot of knowledge and there are certain skills I didn’t obtain. So I didn’t pass my test to graduate.”

Ultimately he earned a general education diploma and started looking for a college with a football team. Former classmates at Arkansas Baptist College in Little Rock suggested he join them. And in the beginning, gaining attention from the coaches was difficult. But once he was in the spotlight, his talent was undeniable.

“One particular time, they had to put me in the game to play, and I had two catches for 70 yards. The following game after that I had nine catches, 220 yards, and three touchdowns. And that’s the game that opened up everything for me,” he said. “I started getting looks from other schools. They’d come there just to see me. And then — boom — I just vanished.”

Johnson and friends from the college were playing 7-on-7 football in an indoor arena with glass doors behind the goal post.

The ball was thrown to him.

He caught it in the end zone.

And to stop himself he instinctively put his arm out, where it went through the glass and cut an artery, as well as two nerves.

A friend wrapped his arm in a towel and they loaded him in a car bound for the hospital. 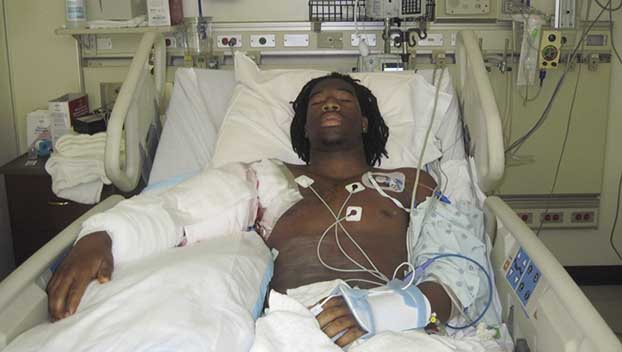 “By the time they got me in there, that’s when I saw the light,” he said. “I’m not sure if it was a light from me laying on the table or lights from the Pearly Gates, but I remember seeing a light.”

Johnson spent four weeks in the hospital — two on life-support — in order to have multiple surgeries. When he returned to school, he no longer had the use of his right hand, so he had to teach himself to write left-handed.

After earning an associate’s degree, he transferred to Houston-Tillotson University in Austin, where he obtained a bachelor’s in Business Administration.

While in Austin he met his now-wife and also began caring for two younger siblings, so they moved to Port Arthur, where her family lived, to have more of a support system.

But Johnson had never planned to do anything except football. While trying to figure out what direction he wanted to go, he began substitute teaching at Memorial High School —suddenly his past had become his future, but in a positive way.

“I really didn’t see myself being a teacher,” he said. “But when I realized how many people were going through the same situations I was going through when I was coming up, I was able to let them know, ‘you shouldn’t do things that way, try this way.’ And they started listening to what I was saying and thanking me for it. My voice was needed.”

Now a Career Prep teacher at Bob Hope High School, the man who had to fight to stay on track most of his life is fighting for others.

Two years ago he created We Hea Nah (we’re here now), a foundation aimed at using his story to motivate children and parents.

“I was working around the gym with some of my buddies and I kept saying, ‘well we here now.’ So I put a twist on it to say, whatever you’re going through in your life, once you wake up to do something that you really love to do, we here now,” he said. “Even if you don’t feel like going to work, we here now so let’s go put the work in.”

He said in 10 years he hopes to see We Hea Nah become a large initiative that allows him to reach people everywhere.

“I love kids. And, like I said, I never saw myself as a teacher but I feel like it’s a stepping stone to get to my future, which is standing in front of crowds, talking to parents and helping the community save lives,” he said. “You can’t save everybody, but you reach one and teach one. All you need to do is reach one person, and that person will reach someone else. So, we here now.”