The Memorial Titans are in the second round of the playoffs for the first time since 2017. A group of upper classmen leads the team, but the future is bright in Port Arthur with two freshmen getting significant snaps for the Titans.

Tai’yion King starts at linebacker for Memorial and has made his presence felt with his size and speed. 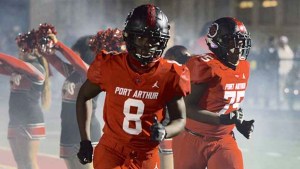 Tai’yion King is a linebacker for the Memorial Titans. (Chris Moore/The News)

Prior to this season, Head Coach Brian Morgan had not had any freshman on his varsity squad but said the freshman on this year’s team are key contributors.

King has recorded 38 tackles on the season, including seven tackles for loss.

The Titans travel to Lufkin to take on Frisco Wakeland today. Kickoff is set for 7 p.m.