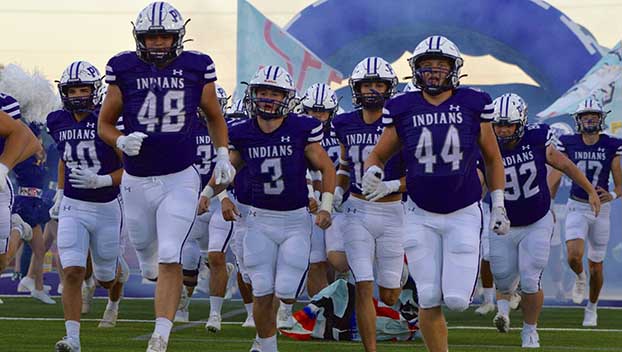 KATY – With both teams entering the game riding seven-game winning streaks, you expected a tightly contested game and one team was going to have their season end. That was case Friday night.

Shea Adams rushed for over 100 yards and scored twice, and Port Neches-Groves held off a furious come back by Austin LBJ for a 24-19 win in Region III Class 5A-Division II Area Round playoff action at Rhodes Stadium.

“We seem to find a way to make things interesting down the stretch week in and week out, which seems to be our MO right now,” said PNG coach Jeff Joseph. “At least we are finding ways to win the close ones.”

The Indians, who have won eight straight games, will face the winner of the game between Belton vs. Brenham next week in the Region III Class 5A-DII semifinals.

PNG’s defense came up huge in the fourth quarter. The Indians stopped LBJ three times on downs. The Jaguars did score on a 19-yard touchdown pass from Ali Scott to Sedrick Alexander with 1:18 left to cut the lead to 24-19.

“We talked before the game about just battling and competing on every snap,” said Joseph about the PNG defense. “They played with great effort and they played as a team. The other team has a ton of good players. The only way to beat a team with good players is to play as a team. Our defense went out and did that tonight.”

The Jaguars tried an onside kick, but it was recovered by the Indians’ Sean Gardiner. With LBJ having no timeouts left, PNG just lined up in the victory formation to run out the clock.

LBJ scored the only points of the third quarter. Ali Scott connected with Noah Baker for a 40-yard completion to the PNG 25. Sedrick Alexander scored two plays later on a 31-yard touchdown run. The Jaguars’ two-point conversion run failed to give PNG a 24-12 lead with 7:17 left in the third quarter.

“They (LBJ) changed up what they were doing on defense in the second half, and it affected us a little too much,” said Joseph. “We weren’t able to create the space we were able to create in the first half. That’s something we’re going to have to adjust to. They blitzed the heck out of us in the second half. They are a really good team. Wins are hard, getting yards and first downs are hard.”

LBJ won the toss and elected to receive the opening kickoff. PNG’s defense was up for the challenge, forcing a quick three-and-out by the Jaguars. A 21-yard punt gave the Indians good field position at the LBJ 43.

PNG (10-2) didn’t waste that good field position. Crippen hit Prosperie for a 25-yard completion to the 15. However, the drive stalled, and the Indians had to settle for a 29-yard field goal by Andres Sandoval to give PNG the lead at 3-0.

LBJ answered right back with a quick three-play scoring drive. Ali Scott hit Fatu Mukuba for 5 yards. Caleb Crenshaw rushed for 29 yards. Sedrick Alexander followed with a 43-yard touchdown run. The extra point was no good to give the Jaguars a 6-3 lead with 8:13 left in the first quarter.

LBJ fumbled the ensuing kickoff, which was recovered by the Indians’ Mason Stotts at the Jaguars 18. PNG called four straight running plays. Crippen scrambled for 8 yards on first down.

Shea Adams followed with three straight runs, the last of which was a 3-yard TD run to extend the Indians’ lead to 17-6 with 3:00 left in the first quarter. That sequence really allowed PNG to take control of the game.

PNG added another score in the second quarter. Facing a fourth-and-seven, the Indians dipped into the trick plays. Looking like they were going to bring the punt team on the field, the offensive line stopped short of the sidelines, lined up really quickly and Crippen hit Guarnere on a screen pass that went for 16 yards to the LBJ 35 to keep the drive alive.

Adams followed with runs of 3, 11 and 5 yards to the LBJ 16. An illegal formation penalty pushed the ball back five yards, but Adams followed with a 21-yard touchdown run up the middle. That extended PNG’s lead to 24-6 with just 35 seconds before halftime.

THE PLAY OF THE GAME WAS…After Cole Crippen hit Chance Prosperie on a 13-yard touchdown pass, LBJ fumbled the ensuing kickoff that was recovered by the Indians’ Mason Stotts at the Jaguars 18. Shea Adams scored four plays later to give PNG a 17-6 lead and they would never look back.

THE GAME BALL GOES TO…Junior Shea Adams who rushed 26 times for 117 yards. He had touchdown runs of 3 and 21 yards.

UP NEXT…The winner of this game plays the winner of Belton HS (9-2) vs. Brenham HS (7-4) in the Region III semifinals next week.