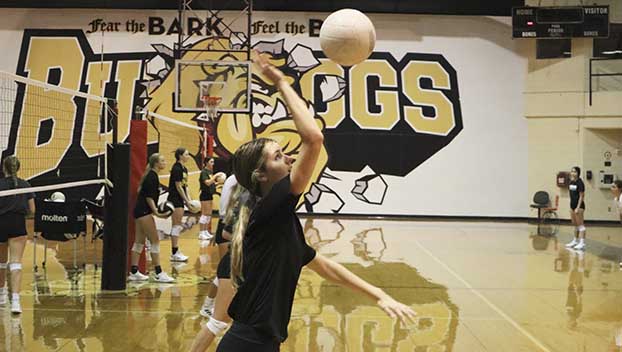 Ava Whitehead is ready to take on a bigger leadership role with the Bulldogs. (Chris Moore/The News)

More than a dozen local volleyball players were named to the All-District 17-5A teams this week.

Of the 15 players named, Nederland led the way with eight representatives, followed by Port Neches-Groves with four and Memorial with three.

“Obviously, I try to tell them that if they do the work, all of the accomplishments will follow,” Nederland Head Coach Allie Crommett said. “They never worried about stats. I don’t use stats going into those things. As long as they are taking care of what they needed to on the court, then they are going to be remembered by the people we play.”

Crommett said the team’s selflessness showed up on a nightly basis and is why Nederland produced the best season for the program since 2006.

“It was well deserved,” Box said. “(Bost) was one of the top scorers on the team. She was a great leader. I feel like we could always count on her to score when we needed it the most. She always brought a lot of energy on the court.”

Nederland’s Naysa Arnold and Kamryn Smith made the second team, along with PNG’s Allie Wright.

“Wright was our libero,” Box said. “She also had a huge presence on the court. She was one of my best servers.”

“I feel like our team really bought into it,” Crommett said. “That led to the wins. They knew if someone was going to get hit at, they would make it playable. Our setters were going to put the ball in a position for our hitters to put it away. Everyone was doing what they were supposed to, and it allowed everyone to have success.”

Nederland also saw plenty of success off the court and in the classroom.