Titans not content with single playoff win, ready for Wolverines 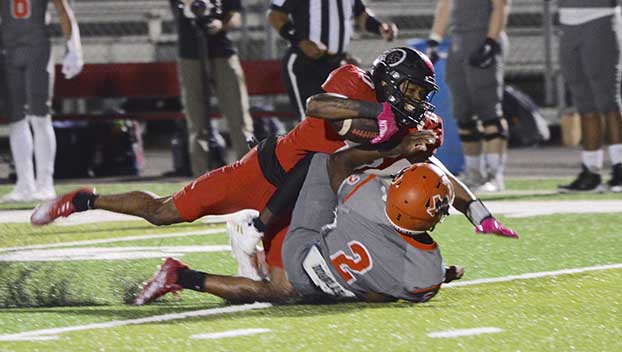 Caleb Goodie lands on a defender after making a catch. (Chris Moore/The News)

The Memorial Titans won their first playoff game in five years Friday with a 48-41 win over McKinney North.

Even though most members of the Titans have not experienced a playoff win, Head Coach Brian Morgan said his team is not satisfied.

“We’ve never talked about winning one playoff game,” he said. “We think our guys are pretty good and have a shot to make a deep run in the playoffs. We are just kind of going on as normal. It is another elimination game, like it feels like it has been for the past few weeks.”

The Titans will travel to Lufkin to take on Frisco Wakeland at Abe Martin Stadium. Kickoff is scheduled for 7 p.m. Friday.

Wakeland enters the game with a 6-4 record and coming off a 42-28 win over Birdville in the first round of the playoffs.

The Titans, who had the most explosive offense in the district heading into the playoffs, have recently found more ways to generate big plays.

On the backside of the regular season, the Titans started to use cornerback Jelani Chevalier at running back. The track star’s impact was felt in the first round as he recorded 17 carries for 77 yards and two touchdowns.

“He is just an older guy that is a little more physically developed,” Morgan said. “He has been with the program for four years and has been in track for four years. Realistically, he is probably the fastest person on the team. We just want to find ways to get him the ball. It makes things easier when it is a 60-yard run as opposed to a 16-yard run. It gives us fewer chances to screw up.”

Teams in the playoffs are often trying to find new ways to get playmakers involved.

During Friday’s game, receiver Caleb Goodie lined up at running back a few times and ran routes out of the backfield.

Morgan said the Titans had not done that before, adding the team is constantly looking for ways to get playmakers in favorable matchups.

“In crunch time, we understand who are our most explosive players and how to be creative and get them the ball.”

“I really like their quarterback,” Morgan said. “He throws the ball well and gets it to where it is supposed to go. He moves around in the pocket well. He has a big left tackle that is a good player. They have a tight end that I am really impressed with. He is a Division I guy that blocks and catches. They have some receivers that go with him. Most of the receivers play on defense, as well. They are definitely a test of skill and stopping the pass.”