Titans learn game details for second round of playoffs 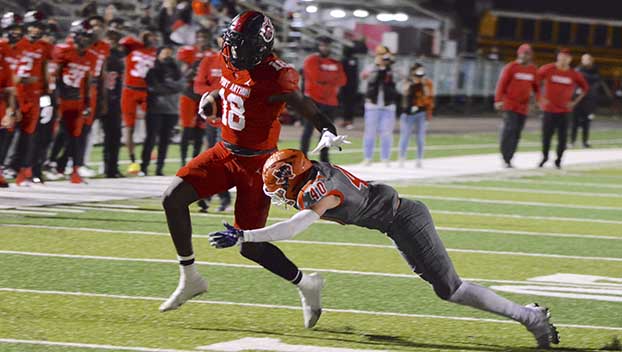 Najiya Green (18) breaks a tackle after a catch in the first half of the Titans' playoff win. (Chris Moore/The News)

The Memorial Titans made it to the second round of the playoffs for the first time since 2017 with a 48-41 win over McKinney North Friday.

The Titans advance to take on Frisco Wakeland in the Area Round.

Kickoff is set for 7 p.m. Friday at Abe Martin Stadium in Lufkin.

Seniors Davion Wilson, Caleb Goodie and Jelani Chevalier put on an offensive show in leading Memorial to a 48-41 win over McKinney North Friday night in the Region II Class 5A-Division I Bi-District Round of the playoffs at Memorial Stadium.

“I didn’t think that we played very good, but happy to come out with a win,” said Memorial coach Brian Morgan. “We had some penalties that we can’t have. That’s a good football team and they kept fighting. They found some holes in our defense that we have to get cleaned up.”

Memorial (10-1) broke open a tightly contested game with three straight touchdowns to pull away. Wilson hit Goodie on a 40-yard scoring strike to put the Titans up for good at 41-34 with 4:58 left in the third quarter.

“I thought it worked out for us. We were able to throw the ball early and then after the weather delay, we were able to run it well,” said Morgan. “We thought we could move the ball against those guys. Our kids did a good job.”

Jacori Smith-Jackson intercepted Colin Hitchcock on North’s next possession and returned it all the way to the 2. Chevalier scored on a 2-yard TD run to put the Titans up 48-27 with 10:52 left in the fourth quarter.

Memorial took the opening kickoff and marched down the field for the game’s first score. Ja’coryn Baker ran for 13 yards on the first play from scrimmage. Wilson hit Ja’Quan Holmes for a 13-yard completion. Wilson connected with Caleb Goodie for 34 yards to the North 25.

Wilson hit Najiya Green for 15 yards to the Bulldogs 7. Baker scored on the play for a 7-yard touchdown run. The extra point was no good due to an issue with the snap, which gave the Titans a 6-0 lead with 8:40 left in the first quarter.

North looked to answer, putting together a length drive. Memorial’s defense was flagged three times on the drive for pass interference, holding and a face mask to aid the Bulldogs drive. The defense clamped down when it needed to, stopping North on fourth-and-goal at the 1 for no gain.

The Titans weren’t able to move the ball and were forced to punt from the back of the end zone, which only went for 24 yards.

The Bulldogs didn’t waste the good field position this time. Taking over at the Memorial 28. North did have to convert a fourth-and-three to keep the drive alive with Colin Hitchcock hitting Gavin Constantine for six yards. Jayden Walker carried four straight times, the last of which was a 1-yard touchdown that put North up 7-6 with :01 left in the first quarter.

Memorial was able to answer right back with a scoring drive. Wilson and Goodie connected for a 17-yard completion and Wilson hit Holmes for 26 yards to the North 14. Wilson and Holmes connected again for 11 yards on third-and-14 to the North 7.

Luis Blanco kicked a 25-yard field goal, but a penalty on the Bulldogs gave the Titans a first down. Jelani Chevalier scored on a 3-yard touchdown run to put the Titans back up 13-7 with 9:30 left in the second quarter.

The Titans’ defense forced a three-and-out on North’s next possession. However, the Bulldogs tried a fake punt on fourth-and-four with a direct snap to the up back, who was tackled for a three-yard loss.

Memorial took over at the North 25. The Titans wasted little time in adding to their lead as Wilson hit Holmes on a 15-yard scoring strike to give Memorial a 20-7 lead with 6:41 left in the second quarter.

North was driving when the game was halted at 7:51 due to lightning in the area. After play resumed 30 minutes later, the Titans defense forced a punt.

The Bulldogs defense forced a three-and-out by the Memorial offense. North put together a quick scoring drive. Following a 14-yard run by Walker, Hitchcock hit Korbin Hendrix on a 29-yard touchdown pass. That cut Memorial’s lead to 20-14 with just 2:03 left in the second quarter.

Memorial tried to put together a scoring drive before halftime, but penalties stymied that drive. The teams went into the locker room at halftime with the Titans leading the Bulldogs 20-14.

“We thought they were a good football team, and it wasn’t going to be easy,” said Morgan. “This is playoff football. They have talented kids, especially offensively. They had the ability to score fast. We asked our kids to play together and keep fighting and that’s what they did tonight.”

The play of the game was… Jacori Smith-Jackson’s interception that was returned to the North 2-yard line early in the fourth quarter. Memorial went on to score to take control of the game with a 21-point lead, 48-41.

The game ball goes to… Senior Caleb Goodie who caught six passes for 145 yards. He had touchdown receptions of 44 and 40 yards. He also scored on a 13-yard run.