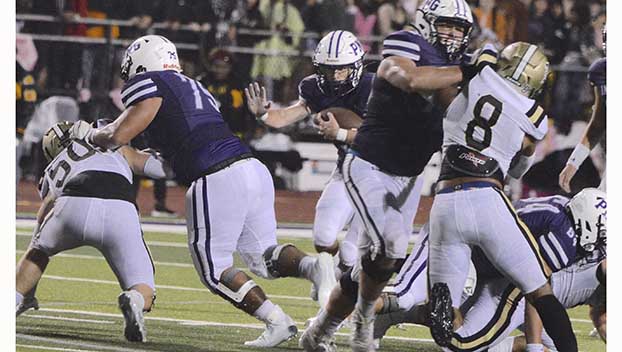 PORT NECHES — The Port Neches-Groves Indians enter the playoffs with a six-game winning streak dating back to the start of district play. Over that span, PNG outscored opponents 246-100.

The defense held all opponents to fewer than 30 points per game, while the offense failed only one time to reach the 30-point mark in a 26-24 rain-soaked win over Nederland.

Defensive Coordinator Matt McDaniel said the Indians have not changed their mentality much as they enter the postseason.

The PNG defense won’t have to change too much. The defense has held opponents to an average of 16 points per game since their its loss seven games ago, including a 42-0 win over Galena Park to close out the regular season last week.

It will also be easier to stay in a routine with another home game, which the Indians received by securing the second seed in the district.

McDaniel said Mason Droddy, Torryan Hinton and Isaac Baker elevated their games at the end of the regular season.

“Those guys have been pretty consistent for us all year and they continue to do that,” the DC said.

On paper, PNG should be the favorites against Montgomery, which went 3-7 on the season and 3-3 in district play. The Bears won their last two games against Lamar Consolidated and Rudder, respectively. As a point of reference, PNG and Montgomery played against Dayton, who is in the same district as the Indians. In a pre-district contest Dayton defeated the Bears 35-28. In October, PNG defeated Dayton by the same score on a last-second play.

In all levels of football, teams that experience postseason success typically can run the ball and play great on defense. The Indians have exhibited those abilities as of late.

“At the end of the day in high school football, if you can play good defense and stop the run, you are going to win a lot of games,” McDaniel said. “I think that is something that we, as a team, have done a really good job of. On defense, it is a team accomplishment that doesn’t fall just on the defense. If you are playing complimentary football, your offense is controlling the clock, that really helps out the defense and puts them in good positions, especially in the playoffs.”