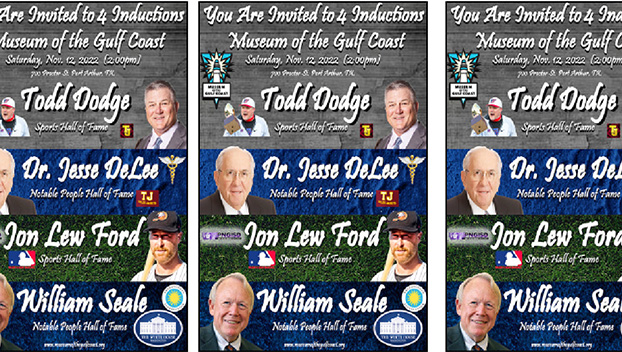 The Museum of the Gulf Coast will induct four new members to the institution’s various halls of fame this weekend.

Todd Dodge, Jesse DeLee, Jon Lew Ford and William Seale will all earn their place in the museum during a ceremony at 2 p.m. Saturday.

For a more extensive look at Todd Dodge’s journey from Thomas Jefferson quarterback to one of the best high school football coaches of all time, check out the weekend edition of The Port Arthur News.

Museum Director Tom Neal said Underwood had told DeLee that he would need to focus on academics due to his small frame. That sound advice led to one of the more remarkable paths for one of the most respected sports doctors around the world.

DeLee also recently learned he will be inducted into the Texas High School Football Hall of Fame for being a team doctor for more than 1,000 games.

“He and another guy wrote the standard for sports medicine,” Neal said. “That book is in its fifth edition now. He has toured throughout the world talking about this stuff.”

Neal said DeLee learned about hip replacement surgery in England from the first person to perform it.

He graduated from TJ in 1964 and got his medical degree from the University of Texas Medical Branch in Galveston.

DeLee is currently an Adjunct Professor of Orthopedic Surgery at UT Health San Antonio and has written more than 175 scientific articles for various medical journals and numerous orthopedic book chapters throughout his career.

Jon Lew Ford is a current player/coach in the Minor Leagues. Ford was born in Beaumont in 1976 and graduated from Port Neches-Groves High School in 1994. He is an outfielder and hitting coach for the Long Island Ducks.

He graduated from Dallas Baptist University after setting the single school batting record, hitting .507. The Boston Red Sox selected him in the 12th round of the MLB draft. After a year in the minors, Boston traded Ford to Minnesota in 2000.

In 2004, he recorded his best season in the MLB, earning two points for the American League MVP. He earned Player of the Week for the week of August 21, where he hit 12-for-33, including 3 home runs, and leading the league in RBIs and runs for that week.

Ford bounced around professional baseball after that, eventually landing with the Ducks for a third stint.

Seale is the lone posthumous inductee of the group. The Beaumont native died in 2019 after battling a longtime illness. Seale was widely considered one of the top historians for the Whitehouse, writing more than 40 books on topics ranging from biographies to historic architecture. Born in Beaumont in 1939, Seale received his PhD from Duke University. He taught for several years at multiple colleges, including Lamar University.

In 1965, he moved to Washington D.C. and became curator of cultural history at the Smithsonian Institution from 1973-1974. He was a regular contributor to C-SPAN, where he would talk about history and preservation of significant American buildings. He was also a consultant on multiple restoration projects to state capitols and historical buildings across several states.

Some of his most notable works are The President’s House (1986 and 2008), The White House: History of an American Idea (2005) and White House History (journal).