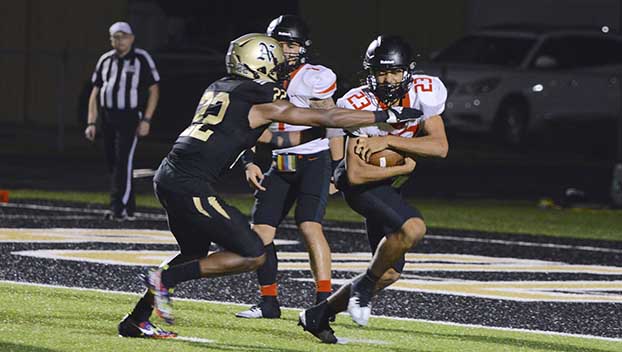 Albert Simon wraps up a Texas City running back for a loss of yards. (Chris Moore/The News)

NEDERLAND — Dave Campbell’s Texas Football magazine predicted Nederland to be on the bubble to make the playoffs before the season started. That prediction was prior to an exodus of seniors that left the team with six sophomores starting on defense.

Despite missing the playoffs for the second straight year, the team’s play from the youthful group bodes well for the Bulldogs’ future.

A 42-7 loss to Texas City ended Nederland’s season, but Head Coach Monte Barrow said he is proud of his team’s effort.

“I told them that they aren’t the only ones to be in the position they are in,” he said about his message to the team. “I don’t know if it matters what your record is. But most teams lose their last game unless you win a state championship. When that feeling passes, and I hope it passes quick, hopefully they lean on the journey they had together.”

Nederland (2-8, 2-5) had wins over Fort Bend Willowridge and Galena Park, but the Bulldogs’ most impressive performances might have come in losses in hectic conditions.

Against Fort Bend Marshall, the game was delayed more than two hours due to lightning. The young Nederland defense held Marshall to 24 points, which was their lowest total in district play.

Against rival Port Neches-Groves, the Nederland defense scored a go ahead touchdown and played the first half in a downpour that caused the turf to bubble and float. Nederland lost that game in the final minute, 26-24, but many players felt it was the best the team had played.

The coach said those games and conditions helped reestablish how unpredictable games and seasons can be.

Barrow credited the senior group that played and led by example for a younger team in need of guidance.

“For them and as many young players as we had, I think they got a good example of what it takes to lead a team,” Barrow said. “They learned that there are eyes on them on the field, off the field and in the classrooms and hallways. Those things matter to young guys because they see it. Hopefully, their lasting impression will to fruition in the next couple of years as they grow into those leaders.”

Youthfulness can be the downfall of a high school team, but experience can also help mature a squad and give lessons that cannot be taught in practice.

Barrow said the team will be able to use some of that momentum moving forward.

“They have to build on that in the offseason,” he said. “That experience alone is not going to carry them the next two years, but they have something to pull back from and lean on.”