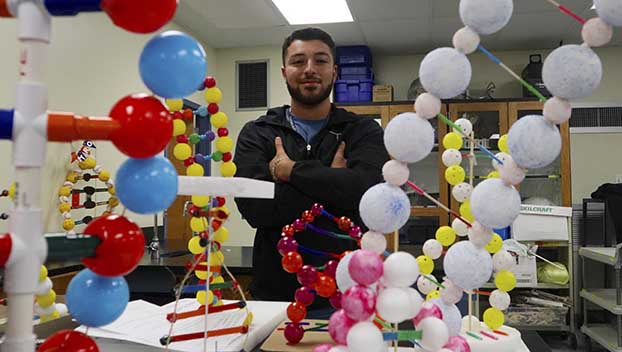 NEDERLAND — Bilal Alani definitely has a full plate for a student. As a senior at Nederland High School, he is the captain of the tennis and soccer teams, in all honors classes and is part of several organizations.

“My favorite subject throughout high school has been chemistry,” he said. “I took it my sophomore and junior year. I want to major in chemistry in college and then go to med school.”

Along with being a top-notch student, Alani can speak three languages. He moved to the United States when he was 4, with Arabic being his first language. He also speaks English and is fluent in Spanish. 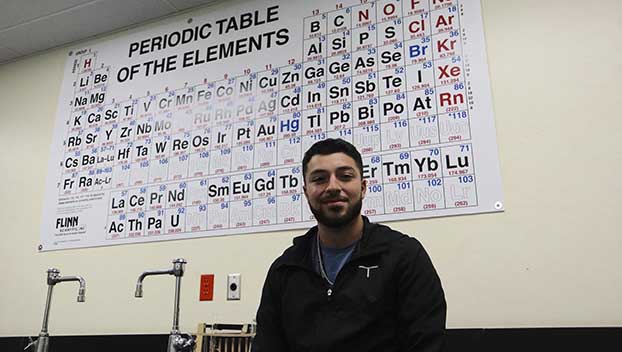 Alani said chemistry has been his favorite subject so far. (Chris Moore/The News)

“Most of my interests revolve around school,” he said. “I am involved in Terrific Nederland Teens, which is where we go around the school district and speak about drug awareness. I am also involved in student council, president of Key Club and Honors Society. I am also in Spanish Honor Society.”

The busy schedule forces Alani to be a pro at time management. He focuses on tennis in the fall and then lets soccer take priority in the spring, while still participating in the spring tennis season.

“I try to stay organized with everything,” he said. “Sometimes, I have to leave some things at the last minute, because stuff gets crowded with my schedule. I just take it one thing at time so I don’t stress myself too much.”

Alani is fascinated by science and has a particular interest with lab work.

“We would learn stuff in the labs and then I would go outside after school and not realize how much was right in front of us without knowing it. I am applying the knowledge from class in the actual world. I just find it interesting.”

Alani was recently accepted into Lamar University, where he hopes to get his undergraduate degree in three years before pursuing his medical degree. From there, Alani will work towards a specialty in the medical field.