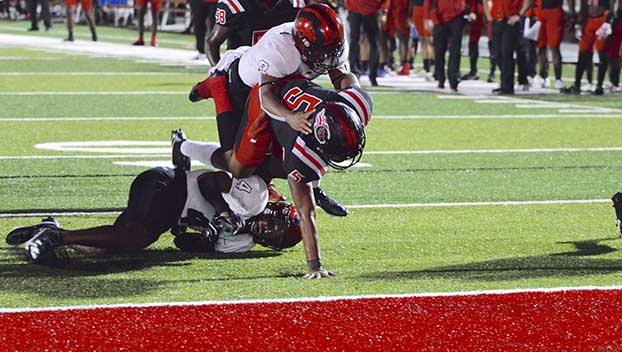 The Memorial Titans won their third consecutive district title Thursday with a win over Kingwood Park.

The Titans will host McKinney North at 7 p.m. Friday at Memorial Stadium.

“It is good the senior class,” Memorial Head Coach Brian Morgan said. “Some of these guys have played for a long time. The consistency has been really, really good. It is good for the young kids to see. When you do that, you have a chance to really be successful.”

Morgan said the past two games acted as playoff-worthy competition.

“Those games had such big implications on the rest of the year, really,” he said. “It thought the kids did really well. I don’t think the score was really indicative of the game. They never really moved the ball on us outside of the fumble recovery.” 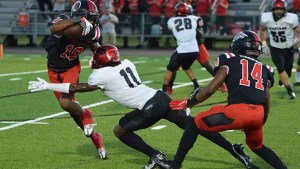 Goodie (10) is averaging 100 yards receiving and one touchdown per game. (Chris Moore/The News)

The win also prevented the Titans from having to make a long road trip.

The Titans would have likely had to travel five hours if they had the third or fourth seed.

Memorial beat Kingwood Park 34-22 to secure the the title.

Senior Davion Wilson turned in another stellar game, and Caleb Goodie hauled in a pair of touchdown passes to close out the regular season.

Wilson completed 17 of 21 passes for 218 yards and two touchdowns. He also ran for 91 yards on 14 carries and had 1 TD. Goodie caught three passes for 100 yards, which include touchdowns grabs of 24 and 70 yards. Jelani Chevalier added 114 yards rushing on 14 carries with a touchdown.