Memorial drummer keeps beat with the use of one hand 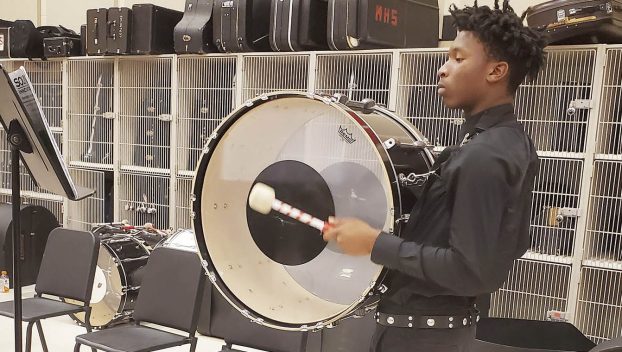 Memorial High School sophomore DeCarlos LaFleur plays the bass drum with the use of one hand. (Mary Meaux/The News)

DeCarlos LaFleur remembers the moment he realized he wanted to be in band.

It was during a pep rally when the band came marching in that led LaFleur to ask the band director at Thomas Jefferson Middle School if he could join.

Band Director Alex Frazier said LaFleur is just as competitive as all of the other section members. And he’s not just in the drum line; he leads the other bass drummers, meaning he has the responsibility of leading three others in his section.

He is responsible for getting with the head section leader to discuss what the bass drummers should be doing.

And he’s performing with the use of just his left hand. 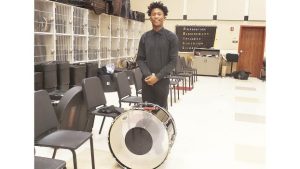 DeCarlos LaFleur was born with a disability that limits the use of his right hand. (Mary Meaux/The News)

LaFleur was born with a medical condition that limits the use of his right hand. This leaves him hitting the bass drum with one mallet instead of two.

As a musician he has learned to work with the disability and perform at a high level.

He uses this as motivation.

His first year in band with the bass drum was hard but he got used to it. This year it’s no longer hard.

Frazier noted LaFleur does all of this playing with one of the heaviest instruments strapped to him. 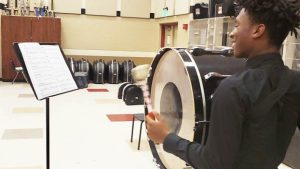 The drummer isn’t discouraged if he hears someone say he can’t be a percussionist or that he can’t keep up.

“I show them that I can,” the student said.

“For as shy as he is in this setting, we really see him come alive with the band,” Frazier said. “He is somebody from the day that we met him last year as a freshman, he made it clear, not so much in his words but in his actions, he didn’t see himself as disabled or unable to do any of the things other drummer did. Any kind of accommodations that we tried to come up with to make it easier for him, more times than not, he didn’t want those. He wanted to do it the same way that everybody else did.”

That go-to attitude extended to a summer band tradition of running the Titan Mile. Frazier said when the students are there during this time, he works to get them in marching condition before starting their marching fundamentals.

Students exercise for half an hour and after a short water break, they run the Titan Mile from the band hall, around the park, all around the school and back to the band hall. Students have 30 minutes to do the run.

LaFleur, he said, is one of the stronger runners.

“He made it clear he didn’t want any kind of special treatment. He wanted to be held to the same standard and I really think he is an inspiration to our students and, definitely, our staff,” Frazier said. “When you have somebody that’s got the kind of attitude that he has, that he’s not just capable but he has more than enough with the tools God gave him. It is something that’s really inspiring and something that’s really humbling at the same time.”

LaFleur enjoys practicing for solo and ensemble contest when he’s not working on marching band songs. And he enjoys challenging Frazier every now and then to some video games, such as Madden or NBA 2K.

Frazier said LaFleur might not say a lot but you never have to look for him when it’s time to rehearse or travel.

“You never have to ask him to give 100 percent in effort. He’s always on and always ready,” Frazier said.

The sophomore has some advice for other students who may have a disability — you don’t know what you can do until you try.