MONIQUE BATSON — Being a band mom is its own unique beat 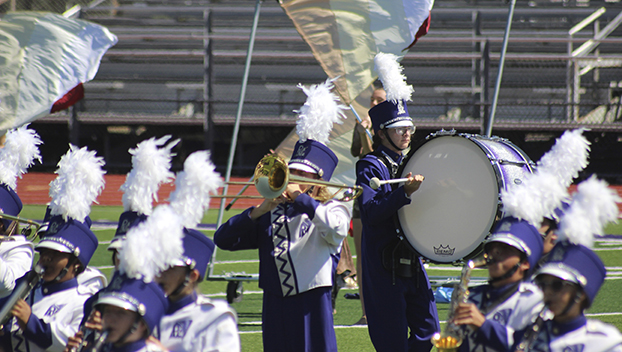 When my now senior decided in fifth grade he wanted to try out for middle school band, I was a bit surprised.

Having two older stepchildren who never looked twice at a musical instrument, this was the first time any of my children showed an interest in music (short of blaring it loudly in their bedrooms).

While I was an active participant in the school choir, my one and only year in band was spent as the yearlong last chair for the clarinet section.

But we went to tryouts, where he made his rounds, the last being percussion. Each child was graded on each instrument except percussion. If you qualified for that exclusive section, you were notified by mail at the end of the year.

And on the last week of summer, the letter came.

My older two and my youngest one had all gravitated towards athletics. With the third becoming a member of the band, I silently thought, “Oh thank God, I don’t have to deal with daily practices and weekly games with this one. I get a break.”

Middle school did not prepare me for what was about to happen. There were the occasional concerts and summer band camps. But it wasn’t until high school that I began to grasp what being in band was all about.

The summer before ninth grade, we started a one-month daily practice schedule. Shortly after school began, I was introduced to the Big/Little program. Every week during football season, the ninth and tenth graders, known as “littles,” and the 11th and 12th graders, known as “bigs,” exchange gifts.

Following the Mid County Madness game comes the reveal, where the “littles” meet their “big” before being swept off in a short, blindfolded trip around the park and its playground before being brought back to the school.

There were weekly games when they occasionally didn’t return home until midnight. And there were the two trips to Disney World that cost well more than I’d like to think about at the moment.

In fact, I’ve spent more money on band than I have the last two holiday seasons combined.

But over the last four years I’ve watched my once shy and reserved child grow into this amazing man with the confidence of 10 people. He’s never home — always out with someone from the drumline. They spend weekends together, holidays together, went to prom as a group, and go out to eat after almost every practice or home game.

When he marches under those stands to lead the football team on the field, his head is held high as his hands move in rhythm.

And then he walks to the field in uniform, where he joins another small, close group that provides sign language interpretation to The Star Spangled Banner before returning to the stands.

Once my youngest joined high school two years ago, he began hanging out with his brother and was practically adopted by the other band members as an honorary player. Any reservations he had about going to a new school and making new friends was immediately swept away by the kindness of this close-knit group.

And with the last game of the regular season ending, it’s hard not to realize how soon it will all end.

Every time I see him walking around in his letter jacket, I start to realize how little time is left to be a part of this close, amazing group of students and their parents.

Every time I see the broken drum stick on his dresser (these are treasures), I tear up just a little. Because as fast as the last six years have gone, the next six months will go even faster.

What I thought was going to be a break from the hustle and bustle of athletics turned out to be the busiest activity any of my children have ever been involved in.

If you have a younger child in the band and feel yourself wanting to roll your eyes every time you have to buy a t-shirt or transfer money for a last minute trip to IHOP, try not to get frustrated. I promise you will miss these moments faster than you’d like.

And next time you’re at a game and see a band, make sure to give them your time and respect. These kids work harder in a few hours than a lot of us do in an entire day.