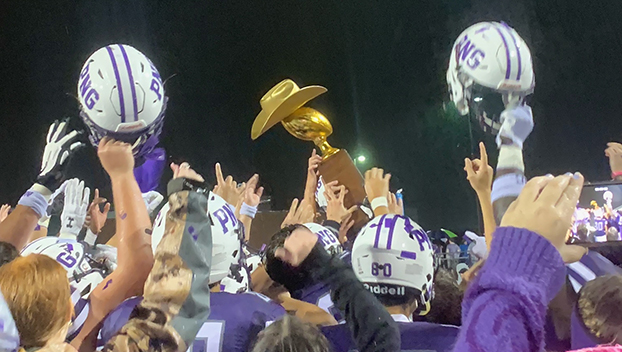 Friday night was one for the books. Not only was the Bum Phillips Bowl another classic contest, the weather made for quite the unique experience.

On game days, I typically try to get to the stadium an hour before kickoff. My intention was to get to Port Neches-Groves earlier than that because we knew the house would be packed for Mid County Madness. The traffic and weather caused me to get there an hour before the expected kickoff, and my fears were correct.

An hour before kickoff with heavy rains on the way, the sheer number of people already at the stadium forced me to park in front of the competition gym, which was also slowly filling up.

Like clockwork, as soon as I got situated inside the stadium on the sideline, the bottom fell out and the deluge that felt closer to tropical storm-rain than any regular shower. Much of Southeast Texas was being pounded.

The Port Arthur News staff on hand swooped up The Bum Phillips Bowl trophy and found refuge under the stands with the rest of the fans. Being late to get under the stands, we were forced to stand on the outskirts, which was not much shelter from the sideways rain.

Thankfully, a mysterious stranger emerged with a tarp, which we held along the entrance to prevent a majority of the rain. Not all heroes wear capes, but they may have a tarp to help secure the most cherished trophy in all of Southeast Texas.

It was also pretty cool to see the amount of people who walked up and commented on the trophy and see moms and dads have their kids take pictures with it.

After about an hour, the rain began to let up and we got word that the teams would soon take the field.

After a couple of quarters, I took my drenched self back to the office to prepare the sports page. Clothes completely soaked, I laid out the sports page with a hole left for the Nederland-PNG results.

I was streaming the game on the Sheffield Productions YouTube page when I saw PNG, who was up 20-17, force a turnover with just over two minutes left in the game. I figured that was it and began to design the page around a for-sure PNG victory. After I finished, I saw Nederland had a lead with just over a minute left to play. I began to panic and started to think of other ideas and was about to change the page.

Of course, PNG drove the field and took the final lead to secure the victory. This game is almost always insane. That night did not disappoint. That game was an instant classic for so many reasons. It was a cool experience and an excuse to use “Purple Rain” as the bold headline on the sports page.