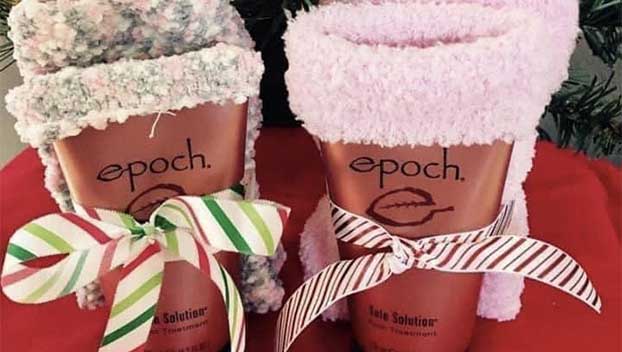 A Port Neches couple is hosting an Adopt a Senior program, which will provide residents of a nursing facility with hand/foot crème, socks with grips and other items for the holidays. (Courtesy photo)

Vanessa Harris and her husband Jason have hosted an Adopt-a-Senior program for several years. But when it came to picking the location this year, Harris knew exactly where to go.

“This year we chose Bonne Vie because my mom was there for a while in May,” Harris said. “After seeing what I saw inside the facility — a lot of the residents there don’t have anyone who comes to see them.”

The program originated during the COVID-19 lockdown. The couple is consultants in a nationwide health and beauty business, and network with other consultants in other states.

“We were trying to find a way to let these senior citizens know they weren’t forgotten about,” Harris said. “We had several team members in that predicament with their parents or grandparents, so that’s where the idea came from.”

That year they chose Oak Grove Nursing Home in Groves.

Bonne Vie, which is in Port Arthur, has a focus on helping patients recover and transition back to their residences.

And it was something Harris is still grateful for.

Her mother developed sepsis from an infection, which ultimately resulted in a form of dementia and the inability to walk.

Harris said the only way she could think to help was to bring her mother to a skilled nursing facility. And now, she’s recovered and is back living in her home.

Bonne Vie serves 130 seniors, so Harris is asking for $20 donations to “adopt a senior.” With the money, the couple assembles a gift bag that includes a cream that helps heal cracked hands and feet, fuzzy socks with grips on the bottom, and a handwritten card from the person who donated the $20.

However, she said, donations can come in other forms.

“Some of my friends who have classrooms have said they could get their kids to maybe draw a picture,” she said. “I’d love to add children’s art in there, too. I think that would be neat for the senior citizens.”

Harris is asking the community to join in any way — whether through donations or educators having their classrooms draw photos.

“We’re just trying to at least get enough donations for every resident there,” she said. “If it were to go crazy and we got a lot of donations, we would contact another nursing home and get all the residents there. It’s just a huge blessing to do it. You don’t even realize until you actually do this. And this year is really close to my heart because of what I went through with my mom.”

Those wanting to adopt a senior can donate by going to paypal.me/hearttoheartbiz or using Venmo to vanessaharris. She can also be contacted through Facebook messenger.