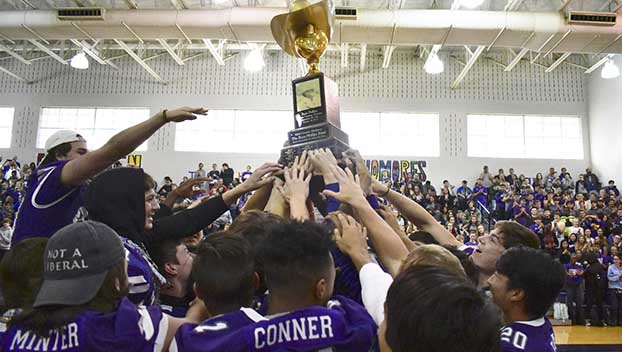 PORT NECHES — Walking around Port Neches-Groves High School, there is little doubt about which game will be played Friday.

While the hallways are filled with reminders that this week is Mid County Madness, the Indians are focused on securing a home playoff game.

In a game that tends to have a lot of swings of momentum, staying even keel is usually key.

While first-year Head Coach Jeff Joseph has not coached in a Bum Phillips Bowl before, he does have plenty of experience in big-time playoff games.

“Coach always tells us to play with emotion, but don’t get emotional,” PNG safety Torryan Hinton said. “There are going to be a lot of people here. We already know what it is going to be like. All we have to do is worry about our jobs.”

PNG (6-2, 4-1 in District 9-5A Division II) enters the week in second place in the district behind Fort Bend Marshall. The top two seeds from each district get to host the first round playoff game. PNG, which has already locked up a playoff spot, is a half game up on Dayton (currently third seed) thanks to a tiebreaker.

They will first have to get past the Bulldogs in a rivalry game that is famous for its unpredictable nature. The past two seasons, the loser of the game between the two schools went on to have deep playoff runs, while the winners exited the playoffs after the first round or missed the postseason all together.

This will be the first time PNG Head Coach Jeff Joseph gets to experience the rivalry.

“Amongst the football team, we are trying to continue to improve on us and get ready for the playoffs,” Joseph said. “But you can feel it around the school. In the community, there is a little bit more energy.”

The game could see some sloppy weather as forecasts show rain throughout the day Friday and well into game time. Joseph said the weather won’t have much impact on his team’s game plan.

“Like I have been telling the guys, both teams have to play in it,” he said.

Kickoff is set for 7 p.m. in Port Neches.

Hinton, who is tied for the district lead in interceptions with three, said he would like to get a win over the Bulldogs for his senior year.

“It would mean a lot,” he said. “This is my last chance to play against them, so I am going to leave it all on the field.”

“They play hard,” Hinton said of the Bulldogs. “They play very hard. They don’t really have anything to lose. I know it is going to be a battle.”

This week marks the 99th meeting between the two teams in 97 years. PNG leads the all-time battle with a record of 52-39-7.

The Indians have won three out of the last four years, with Nederland winning last year in a 38-28 contest.

Groves woman charged with DWI while having child in car