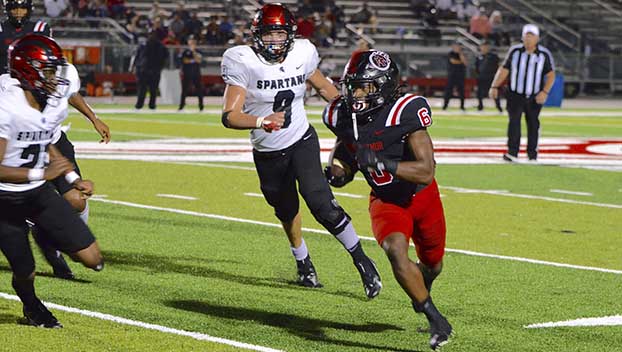 The Memorial Titans did not lack explosive plays despite the downpour Friday in a 21-7 win over Barbers Hill at Memorial Stadium.

The win sets up a winner-take-all match between the Titans and Kingwood Park next week. The winner will earn the District 8-5A Division I title and the No. 1 seed heading into the playoffs.

“We saw the mistakes that we made last week,” Memorial Head Coach Brian Morgan said. “Some of it was controllable. Some of it wasn’t. I thought the kids went out and had a great week of practice and really locked in. It showed tonight.”

Once the lightning cleared the area, the Titans wasted little time striking.

Titans elite kick returner Caleb Goodie showed why he has the most return touchdowns in the district by scoring on the opening kickoff to give the Titans an early 7-0 lead.

“They never waivered,” Morgan said of his team. “We expected it to rain. We talked about it all week. They never put the ball on the ground. They responded well.”

Late in the first half, Memorial’s Jelani Chevalier, lined up at running back, broke free for a run of about 70 yards to give the Titans a 14-0 lead heading into halftime.

“We always feel good about putting the ball in his hand,” Morgan said. “He brings a different gear to the offense. He has a lot of speed and is a senior. Obviously, we think highly of Jelani. Him touching the ball is a good thing for us. In these games, you know you have to run the ball. We knew this week was probably not going to be a throwing week. I think we attempted four passes all game. We relied on the o-line and d-line, and they did their jobs.

Davion Wilson found Ja’Quan Holmes for a short TD pass in the second half to go up 21-0. Barbers Hill scored their only points of the game early in the fourth to round out the final score.