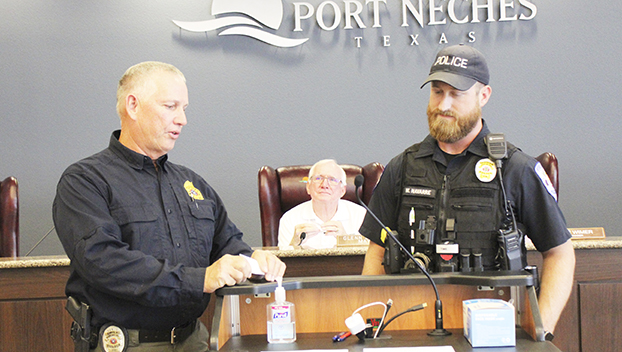 A Port Neches police officer recently received a commendation for saving two people who had overdosed within one week.

Officer William Navarre was recognized by then-Police Chief Paul Lemoine for actions made July 31 and Aug. 7.

“The first one was due to some type of opioid overdose,” said Lemoine the day before he entered retirement. “When (Navarre) got there, the victim was unresponsive…and had turned blue.”

EMS was en route, and Navarre had Narcan in his patrol car.

“After he administered the Narcan, which is a nasal spray like Flonase, the patient came back,” Lemoine said. “He was able to save this person’s life.”

The following week, Navarre received a similar call where the person had overdosed on heroin. Like the week prior, the person was unresponsive and blue in color.

“Without Officer Navarre’s quick intervention…both of those people probably would not have survived,” Lemoine said. “And I know y’all see in the news media how prevalent that is now. Every one of these officers has Narcan in their patrol vehicle. I keep it in my truck, too, because it’s a lifesaver.”

The drug, which counteracts the affects of opioids, was supplied to all Port Neches Police Department officers by the Port Arthur Fire Department.

“Typically officers are first on the scene, and it’s critical to administer that as quickly as you can,” Lemoine said.

The commendation came the same week Governor Gregg Abbott visited Beaumont to discuss a growing concern with fentanyl, which can also be counteracted with Narcan.

“We need to all realize fentanyl is killing Texans,” Abbott said. “Last year almost 1,700 Texans lost their lives because of fentanyl. The (Drug Enforcement Administration) administrator said fentanyl is the single deadliest threat our nation has ever faced.”

Beaumont Police Chief Jim Singletary said of the 65 overdoses last year in Jefferson County, 25 were due to fentanyl.

“It’s coming to Southeast Texas and we’ve got to do something about it,” Singletary said.